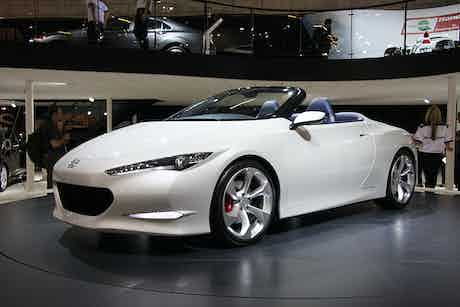 More power then a Mazda MX-5 and the looks of a concept car, read all the latest on the new Honda S2000

With the latest NSX set to go on sale next year and the new Civic Type-R already leaving rivals in its 168mph wake, there’s one glaring omission from the firm’s performance range – a replacement for the much-loved Honda S2000.

Rumour (from motorward) has it that it is a gap the firm will look to plug soon, with a development of the Open Study Model (OSM) that was revealed at the London Motor Show way back in 2008.

Those of you who think the OSM looks a little small to be a direct replacement for the S2000 would be right, it is in fact designed to preview the new CR-Z. But word from Honda insiders is that the S2000 will share much of the OSM’s design language. You can expect the S2000 to get a classic long-bonnet stubby-boot sports car look, with an engine that’s mounted behind the front axle for excellent weight balance and superb handling to take on the likes of the Mazda MX-5 and newly revealed Fiat 124.

The latest news from Japan is the new S2000 is unlikely to go down the hybrid route favoured by the NSX. That would add needless complexity, hiking the car’s price and putting it at a distinct disadvantage against the affordable MX-5. That said it is still expected to cost slightly more than the Mazda.

To compensate, the S2000 looks likely to be offered with more power than its main rival. An obvious engine choice would be the 150hp 1.5-litre turbocharged four-cylinder petrol that’s currently being developed for the new Civic. In its basic form it would hold a 19hp advantage over an entry level MX-5 and could easily be tuned to offer an even more compelling advantage. Another choice is the 310hp 2.0-litre turbo from the Civic Type-R, but it could well be seen as a step too far in what is supposed to be readily accessible junior sports car.

According to carwow’s man at Honda, the coming years are seen as crucial to the company’s success as it pours finances back into R&D following the scale down caused by the global recession. Halo models such as the latest NSX, Civic Type-R and the new S2000 are seen as a top priority as Honda attempts to woo old customers and appeal to new ones.

Keep reading below for all the rumours we have on what could be a crucial model for the Japanese colossus.

Following the Japanese release of Honda’s pint-sized sports car, the S660 (below), the rumour mill has gone into overdrive about the possibility of a replacement for the iconic S2000 roadster.

A rev-hungry VTEC petrol engine, lightweight design and exquisitely engineered chassis made the original S2000 of 2001 an instant hit and Honda will be hoping to repeat its success with a combination of supercar-like styling and F1-derived technology.

The new S2000 is shown in images from a leaked Honda patent application and it appears to borrow styling cues from the NSX supercar. Aggressive feature lines run down the doors and quarter panels while large intakes and louvred vents adorn the front, back and sides of this low-slung two-door.

The headlights blend into a large angular grille and are shared with the NSX and S660 – Honda’s diminutive two seater sports car which is soon destined for the UK market.

A low nose, slim wing mirrors and a large rear diffuser hint at the effort Honda has put into making the new S2000 as aerodynamically slippery as possible. As yet, we can only speculate about what speeds it may be able to achieve.

Unlike the original S2000, the new car is unlikely to be produced as a roadster, but could share production facilities and carbon fibre components with the new NSX. The use of aluminium instead of steel in places will help to cut the weight down to under 1,400kg.

Although originally slated to be fitted with the 2.0-litre turbocharged VTEC engine from the current Civic Type R, concerns over emissions regulations have made it more likely that the new S2000 will be powered by a 1.5-litre turbocharged unit. Honda has made reference to developing Formula One hybrid technology alongside McLaren and it seems likely the S2000 will make use of a similar hybrid system.

The total power output is expected to be 300hp with the turbocharged engine being aided at low revs by the instant torque from an electric motor within the drivetrain. Power will be transferred to the rear wheels through a seven-speed double clutch gearbox which may leave fans of the original manual S2000 slightly disappointed.

In a bid to reduce weight and costs, it’s unlikely that the new S2000 will feature the same levels of tech as its NSX bigger brother. Potential buyers can expect more comprehensive equipment levels than the back-to-basics S660, however, and the bigger price-tag means the levels of fit and finish are likely to be high.

It’s unlikely the new S2000 will be officially revealed at the Tokyo motor show this October so we may have to wait until 2016 to get a good look at the finished product.

With a predicted price of £50,000, it seems Honda is aiming squarely at the competition from Porsche, Audi and BMW. If you’re already tempted, you’ll have to wait until 2018 to get your hands on the keys.

Save money on your new Honda

If you’re tempted by a high-performance Honda but can’t wait until 2018, put a Honda Civic Type R into our car configurator and let carwow find you a great deal. If you’re after something else let our car chooser or deals pages help you make a decision.