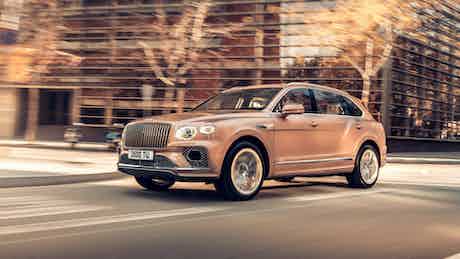 The new Extended Wheelbase version of the Bentley Bentayga has been revealed. Read on for all you need to know about this new SUV limousine.

Bentley has announced an Extended Wheelbase version of the Bentayga. It’s a luxury limousine in the form of an SUV, rather than a traditional saloon car.

This alternative to the Maybach GLS and Rolls Royce Cullinan will go on sale later this year. No official prices have been announced, but Bentley expects some customers to spend more than £300,000 on their extended-wheelbase Bentayga.

Over 2,500 new parts go into making the Extended Wheelbase Bentayga compared with the standard car, but none of them seem to be used at the rear, where it looks exactly the same as the standard Bentayga V8.

It’s from the side where the obvious changes have been made. This version of the Bentayga is 180mm longer than the standard car, and all of this increased length is in the rear doors. To accommodate this, the car has a new roof, floor and side panels.

From the front, the Extended Wheelbase gets a new front grille with vertical slats which can either be finished in chrome or gloss black. Also new for this Bentayga are some mirror finish alloy wheels.

Being a limousine, the back seat is the place to be in the Bentley Bentayga Extended Wheelbase. The standard layout is a four plus one, with a temporary middle seat for occasional use. You can also have a full five-seater version or a four-seat model.

In the four-seater, the rear passengers get 16-way adjustment, heated and cooled seats and five massage programs.

You can also upgrade to the Airline Seat option, which adds 22-way adjustment and a VIP mode that moves the passenger seat forward, reclines the backrest by 40 degrees and deploys a footrest.

Elsewhere, the Extended Wheelbase Bentayga gets some new wood and metal trim, as well as unique leather upholstery and quilting throughout. In fact, there are over 24 Billion different trim combinations available.

That means everyone on earth could have three Bentaygas each without anyone having to share their own unique specification with anyone else.

The Bentley Bentayga Extended Wheelbase gets the same 4.0-litre twin-turbocharged V8 as the standard Bentayga. It has 550hp and 770Nm of torque, and it’ll do 0-60mph in 4.5-seconds, despite weighing over 2,500kg.

To make this huge car easier to manoeuvre, the Extended Wheelbase Bentayga gets rear-wheel-steering as standard. This makes the turning circle 7% smaller than the standard Bentayga, as well as improving high-speed stability.

Bentley hasn’t confirmed pricing as of yet, however they have said you’ll be able to spend over £300,000 on one.

Looking for an easy way to change your car? Then head over to carwow. you can sell your car, as well as get a great deal on a new one, all from our network of trusted dealers and all from the comfort fo your sofa. Tap the button below to get started today.