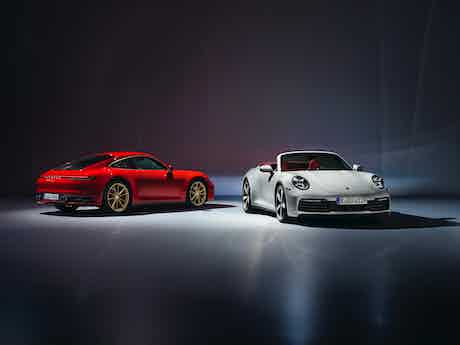 The entry-level version of the famous Porsche 911 sports car is on sale now. Here’s all you need to know…

Porsche has revealed the basic version of its new 992 (its internal codename for the latest version of the 911) after the car launched in mid-range 992 Carrera S guise earlier this year. Like the S, the latest model gets new tech, uprated infotainment and a slight hike in power over the car it replaces.

Spotting the standard Carrera from the mid-range Carrera S will take a trained eye. The lower-spec car gets wheels that are an inch smaller – 19 inches at the front and 20 inches at the back – new exhaust trims and… well, that’s about it.

The power drop is more notable. The Carrera’s 3.0-litre flat-six thumps out a hearty 385hp (15hp more than the old model, but a noticeable 65hp less than the Carrera S) to the rear wheels through an eight-speed automatic gearbox. Peak torque of 450Nm is available from just 1,950rpm.

Needless to say, performance is more than acceptable. The Carrera gets from 0-60mph in four seconds, 0-125mph in 14.2 seconds and hits 182mph flat out. The optional Sport Chrono Package that, among other things, adds launch control and sharpens the throttle, shaves a further 0.2 seconds off the 0-60mph time.

As well as its increased performance over the previous-generation 911 Carrera, this new version gets a host of new tech that will make it easier to live with. That includes a 10.9-inch touchscreen infotainment system and the option to specify a variety of self-driving tech that means the 911 can accelerate, brake and steer itself on the motorway and in heavy traffic.

Wet mode is another new addition already seen on the faster Carrera S. Fitted as standard, it uses acoustic sensors in the car’s wheel arches to sense moisture on the road and warn you that the going has got slippy. Heed the warning, choose Wet mode in the car’s drive select and the system can trim the throttle and dab individual brakes to guide your around slippery corners with the expert touch of an F1 prodigy, no matter how hamfisted your inputs are.