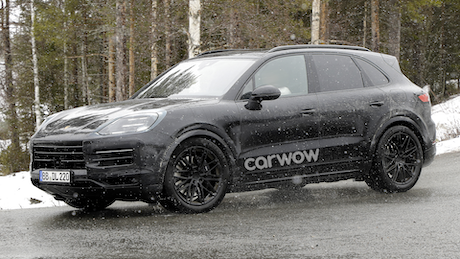 The refreshed Porsche Cayenne has been spotted ahead of its debut later this year. Read on for full details of this updated sporty SUV.

The Porsche Cayenne and Cayenne Coupe are getting some mid-life updates to keep these high-performance SUVs looking fresh for 2023.

Prototypes of the ‘Coupe’ model undergoing testing have been spotted, which should get similar upgrades to the standard SUV to help it keep pace with the likes of the BMW X6 and Mercedes GLE Coupe.

The Porsche Cayenne is one of the biggest-selling models for the brand, so it’s no surprise that the new version doesn’t look dramatically different from today’s super-popular SUV.

As you can see on this prototype, visual changes are subtle but the tweaks should give the SUV a slightly more sporty look.

Take the front bumper for example. It’s a touch more aggressive than before courtesy of a larger grille and sharper headlights.

The rear diffuser has also been given a bit of a tweak, too. For example, the current car’s full-width light bar appears to have been dropped from these prototypes.

The upcoming Cayenne looks to have a more rounded tailgate than before, too, with the number plate mount moved to the bottom of the bumper – as you can see on the test car, above.

The cabin of the new Porsche Cayenne should remain mostly the same, with the big touchscreen infotainment system and a tall centre console layout.

Expect redesigned elements to include a subtly tweaked steering wheel and, potentially, a smaller gear selector lever derived from the Porsche 911 sports car.

This should also mean the interior dimensions will remain pretty much identical to the current car, meaning the facelifted Cayenne will have plenty of space inside for passengers and lots of boot space.

Do bear in mind that, because of the way the battery is packaged under the boot floor, the plug-in hybrids won’t be able to match the cargo capacity of the petrol-only models.

It’s likely all the engines from the current Porsche Cayenne range should be carried over to the new car, albeit with some mechanical alterations. This means you’ll likely be able to choose from a 3.0-litre twin-turbo V6 or a 4.0-litre twin-turbo V8.

Both engines will also be combined with an electric motor and a battery in ‘E-Hybrid’ plug-in hybrid models.

It looked as though Porsche would phase out the standard Turbo and only offer an upgrade Turbo S version of the Cayenne, though prototype photos of the Turbo seem to have put that theory to bed. A full-whack Turbo S could still come later, though.

As its name implies, this Turbo S will be faster and more powerful. Where the current Porsche Cayenne Turbo has 550hp at its disposal, a future Cayenne Turbo S could produce around 630hp.

Regardless of what the engine under the bonnet is, all Porsche Cayennes will come with four-wheel drive, and will only be available with an eight-speed automatic gearbox.

Judging from these latest spy shots, a new Turbo S E-Hybrid is also on the cards for the upcoming Porsche Cayenne.

The recently introduced Cayenne Turbo GT Coupe offers up 640hp, the Turbo S E-Hybrid will most likely push out closer to 700hp. That should give it the power to eclipse the current Turbo GT’s 3.3-second 0-60mph time.

The lightly camouflaged car has much of the same visual updates as the rest of the Cayenne range. However, the acid green brake callipers and dual fuel flaps above each rear wheel arch indicate that it is a hybrid, while quad exhausts out the rear tell you that this is likely the range-topping Turbo S E-Hybrid version.

Inside, the gear selector has been partially hidden from view, but it looks just like the unit found in the 911. The oddly protruding centrally mounted infotainment screen is most likely only there for testing purposes and won’t make it into production.

The new Porsche Cayenne is expected to be revealed later this year. Entry-level cars will likely set you back from around £60,000, though could rise significantly over £130,000 for the range-topping models.

Looking to swap into a new Porsche? Check out the latest offers from our trusted dealers to get the right car at a great price. You can also sell your car through carwow quickly and easily, from the comfort of your sofa. Tap the button below to get started.