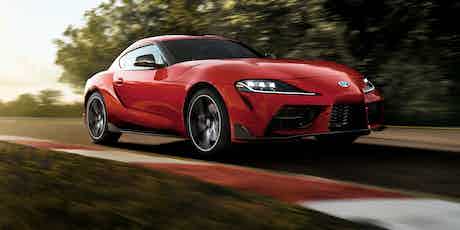 Shortly after being revealed at the Detroit motor show, Toyota announced that the 2020 Supra will cost from £52,695 for the basic Supra 3.0L car, rising to £56,945 for the top-of-the-range special edition. It is expected to first arrive in the UK at the tail end of summer 2019.

There are two main trim levels in the Toyota Supra range: the standard GR Supra 3.0L and the GR Supra 3.0L Pro. There is also a special edition available at launch, called the Supra A90 Edition.

Toyota GR Supra 3.0L
The GR Supra 3.0L will include 19-inch alloy wheels, an 8.8-inch infotainment display, ten-speaker sound system, built-in satnav, USB and Bluetooth connectivity, blind spot monitoring and – most clever of all – automatic emergency services calling in the event of a major crash. It will cost £52,695.

Toyota GR Supra 3.0L Pro
As well as having all the features of the entry-level trim, the Pro edition will add two more speakers and wireless mobile phone charging. There’ll also be a heads-up display on the windscreen, appearing just above the steering wheel. This car will cost £54,000.

Toyota GR Supra 3.0L A90 Edition
Only 24 Toyota Supra cars in the A90 Edition trim will come to the UK, all of which will go to those who paid for a pre-sale reservation. Additions are mostly aesthetic, including new paint stylings and a reupholstered driver’s cockpit. Prices start at £56,945.

Underneath the bonnet of the rear-wheel-drive Toyota Supra lies a three-litre, six-cylinder, twin-turbocharged engine capable of 335bhp. This will take the car from 0–62mph in just 4.3 seconds – over a second faster than the Jaguar F-Type. However, its top speed is 155mph, which is faster than the Audi TT Coupe but 22mph less than the Porsche 718 Cayman S. The Supra comes with an eight-speed automatic gearbox, which is designed to be as fast, fluid and economical as possible. There is no manual option, potentially removing a lot of the fun that could be had from a nippy sports coupe such as this.

The Toyota Supra looks like a GT86 that has been pumped full of steroids. Up front, you get the automotive equivalent of Alien. It’s as if an F1 car is trying to burst through the front bumper, while the sides of the car have hips to rival Jennifer Lopez. Plus, there’s a neat ducktail spoiler round the back. The more you look, the more you notice – like the double bubble roof (cool-looking but also gives you more room to wear a helmet), various cuts and slashes in the body and numerous curves that make it look like the body has almost melted over the car’s chassis.

Inside, the Toyota Supra is simple yet classy. All the controls and dials on the steering wheel and centre console are neatly and clearly laid out, plus the 8.8-inch infotainment screen looks sizeable as it sits in the middle of the dashboard. Everything is where you would expect it to be with no nasty or overcomplicated surprises to speak of so far.

For instant updates on the Toyota Supra – and hundreds of other new cars – sign up for the carwow newsletter.