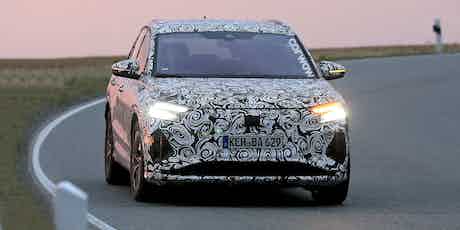 The Audi Q4 e-tron electric car has been spotted testing ahead of its release date later this year. Keep reading all you need to know about Audi’s latest Tesla beater.

Despite the fact the test model spotted is disguised in a camouflaged cloak, the electric car looks to be production-ready. A lot of the key features are hidden but it would seem as though many aspects of the concept car it was based upon, have been carried over to the final design.

The dramatic roofline that sweeps off towards the rear gives it the look of a sporty SUV. Sleek LED lights have been fitted to the front and rear, while the grille, and the triangular vents on the front bumper of the concept car look to have been incorporated in the final design.

The interior of the new Q4 e-tron is still to be revealed but you can expect it to be a fairly similar layout to the VW ID.4 as pictured above. As it’s an Audi, expect high-quality materials and more of a premium finish inside. The car will be packed with all the latest tech, including a 12.3-inch infotainment system and options such as ambient lighting, massage seats and a panoramic sunroof.

Check out the best electric SUVs

The Audi Q4 e-tron is based on the same basic building blocks as the Volkswagen ID.4 so unsurprisingly it will share the same battery and motor options. The range-topping model will come equipped with an 82kWh battery delivering 306hp via a four-wheel-drive system.

The Q4 e-tron will boast of a 0–62mph time of just six seconds and a top speed of 112mph. Like the Volkswagen equivalent, it’s expected to offer a driving range of 280 miles.

Official pricing and a release date are still under wraps but the car will probably go on sale by the end of this year. Expect the Q4 e-tron to be more expensive than the ID.4 on which it’s based, in the region of £50,000-£60,000.

Audi is also working on Q4 e-tron Sportback – an electric SUV with a swoopy, more coupe-like rear end. Tap on the link below to find out more.