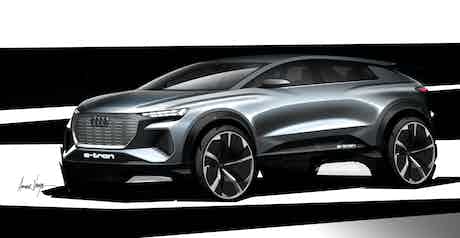 Audi has revealed sketches of the Q4 e-tron concept electric car, which will be revealed at the Geneva motor show next month.

As with both of those cars, the Q4 e-tron get’s an ‘e-tron’ light-up badge to let everyone know, day or night, that you’re driving an electric Audi. It also shares its futuristic looks with those cars, with the mask-style grille and pronounced wheel arches that hint that it’ll have quattro four-wheel drive. Oddly, though, the Q4 doesn’t seem to have the wing-mirror-replacing rear-facing cameras seen on the standard e-tron.

That’s confirmed by the interior pic, which shows no signs of the cameras’ monitors. What you do get though, are the huge infotainment screens that have become synonymous with an Audi cabin. And, this being an e-tron, you can expect it to be decked out in a variety of recycled materials – the e-tron GT had seats upholstered in recycled fishnets don’t you know.

Audi doesn’t mention what will power the Audi Q4 e-tron concept, but it’s likely to have an electric motor at the front and the back for that all-important four-wheel drive. What we do know is that the car previews a production electric SUV that’ll go on sale towards the end of next year.

Sign up to the carwow newsletter to keep up-to-date with all the latest car news.