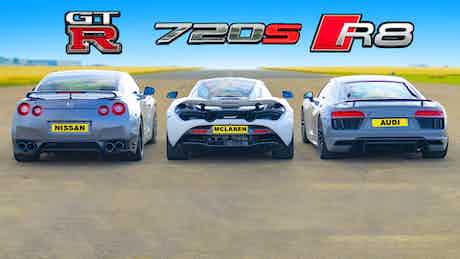 Today’s drag race pits together three sports cars — the Audi R8, McLaren 720S and Nissan GT-R — that have all been given a bit of extra kick.

By extra kick, we mean insane amounts of power.

Take the Nissan GT-R for example. Normally, its 3.8-litre twin-turbo V6 puts out 565hp, however, the engine has been totally rebuilt.

It’s been bored out to 4.1-litre and now, in full boost mode, throws an insane 1,600hp and 1,500Nm to all four wheels through a reinforced six-speed dual-clutch automatic gearbox.

This GT-R is the heaviest car you’ll see in today’s race though, tipping the scales at 1,750kg.

Sat in the middle of the literal road is an Audi R8 that’s seen its 5.2-litre V10 engine slapped with two massive turbos, taking its power up to 1,200hp and 930Nm of torque.

Just like the GT-R, the R8 is an all-wheel-drive car though it uses a seven-speed automatic gearbox. It’s lighter than the Nissan too, weighing in at 1,650kg.

That’s still a bit porky compared to the McLaren 720S here as well though, which comes in at 1,400kg.

It’s also rear-wheel-drive too, with its power sent through a seven-speed dual-clutch auto.

Which of these tuned behemoths comes out on top then? Well, as ever, you’ll have to watch to find out…