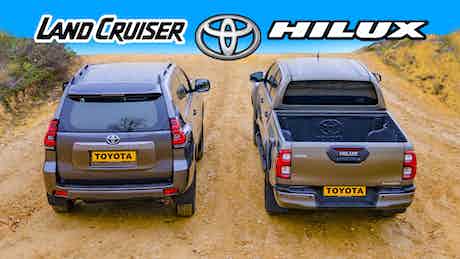 Toyota has a pretty decent reputation when it comes to tough off-roaders. But which one performs best on the rough stuff out of the Land Cruiser and Hilux?

Let’s kick off by taking a look at the Toyota Land Cruiser. We have the base spec commercial version and it has a 2.8-litre turbo-diesel engine with 204hp and 420Nm of torque. There’s a six-speed manual gearbox with low-range mode as well as a centre locking differential.

Check out the top off-roaders on carwow

So which of these two hardcore off-roaders will come out on top? You’ll have to watch the video to find out.