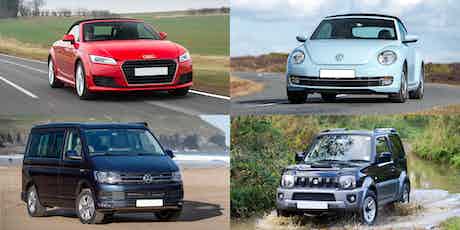 It’s no secret that used car prices are on the rise — and for quite a few reasons.

With everyone emerging from a year of lockdown, many of you with cash saved up and a desire for an adventure, the demand for cars has seemingly never been higher.

Which cars are benefitting the most, though? Well thanks to new data from cap hpi, carwow can reveal the top 10 used cars rising most in value over the last 12 months.

I want to sell my car quickly and easily — how can I do that?

Ah well, carwow has recently launched a new service for just that. You can simply enter the reg for your car, provide a handful of details and then sit back and relax as our trusted dealers present you with an offer on your used car.

Simply tap the green button below to get started and see how much you could get for your car.

The Suzuki Jimny is a cult favourite — how can you not love this cutesy 4×4?

Its problem is supply and demand, though. The latest generation of the car was hard to get a hold of when it was on sale, and now you can only buy it as a commercial vehicle rather than a passenger car.

It’s no real shock then that those wanting Jimny kicks have turned to the previous generation, and values are rocketing as a result — an average increase of 61%.

Read the review of the new Jimny

We’ve been stuck inside for a year, and many of us just want to simply treat ourselves now the world is opening back up. There’s not much better way to do that than with a convertible — and that’s reflecting in values.

The biggest mover is the final generation of the Volkswagen Beetle Convertible, with an average increase of 41.5% in value.

With no return of the Beetle in sight, this could be destined for future classic status too.

The next biggest beneficiary of this boom is the Audi TT Roadster, with an average price increase of 39.8% in the used market.

More specifically, the pre-facelift version of the current generation TT is the one people are clamouring for most. Not all too surprising when the alternative is to wait months upon months for a slightly upgraded version of the car for more money.

If you order a new Ford Mustang Convertible, you’ll be waiting until at least early 2022 for delivery, and demand for used examples reflects the fact many of you in the market just aren’t prepared to wait.

Examples right from when this generation of the Ford Mustang arrived in the UK in 2015 to nearly-new cars are seeing rises, with an average rise of 39.1% in value.

The Vauxhall Cascada hasn’t exactly become an icon since going off sale in 2018, but this often overlooked convertible is seeing a resurgence in demand too.

Prices on the market are up by an average of 38.9%, clearly reflecting just how in-demand convertible cars are at this moment in time.

The Volkswagen California is probably the ultimate campervan, so it’s no shock to see a surge in values as we emerge from lockdowns.

International travel restrictions mean a lot of us in the UK are looking for camping adventures as an alternative, so it’s probably no coincidence prices for used Volkswagen Californias have risen by an average of 38.2%.

Big, convertible Mercedes’ are usually a magnet for depreciation so the rise in used car values might be an opportunity for you to cash in if you’re planning to shift your SL.

Values of the luxo-barge convertible have increased by an average of 38% in the last 12 months — perhaps one that’s not here to stay, either.

The Ford Focus RS was already destined to become a future classic, but it looks as though its increase in value might become earlier than predicted.

The going rate for what looks to be the last Focus RS we’ll ever see has increased on average by 37% in the last 12 months.

Just like its convertible counterpart, the Ford Mustang coupe has seen a rise in values on the second-hand market over the last 12 months.

It’s not quite as much as the drop-top sibling at 37.2% — showing just how strong demand is for convertibles at the moment — but it’s an impressive figure nonetheless.

Rounding out cap hpi’s top 10 is the previous-generation BMW Z4. Again, the clamour for convertibles rears its head with the Z4 seeing an average increase of 36.6%.

Whether or not the bubble will burst remains to be seen, but there’s no doubting the difficulties in getting new cars is having a positive effect on those selling on the used market.

Understeer vs oversteer: What’s the difference?
Lamborghini Aventador generations drag race
Pedestrian crossings in the UK explained
10 of the best drift cars
Volkswagen Passat vs Audi A4
Skoda Laurin & Klement (L&K) trim: what is it and is it worth it?
How long do electric car batteries last?
Types of speed camera in the UK
Drag race: Tesla Model 3 vs Lamborghini Urus
What is the Mini Chili Pack? Is it worth it?
Skoda Elroq electric SUV teased: price, specs and release date
Is this the VW ID1? New electric Volkswagen city car teased: price, specs and release date
Mercedes AMG & will.i.am build a car: WILL.I.AMG GT W1X revealed
Are all electric cars automatic?
Your rights when buying a used car