What is a speed limiter on a car? 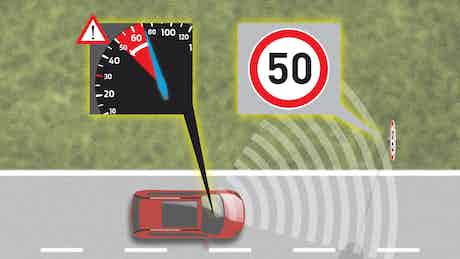 All new cars launched from July 2022 must have Intelligent Speed Assistance, but what is this system, and how does it work?

The rules apply to any car launched in an EU country after that date, while from 7 July 2024 all cars sold from new must have ISA, regardless of when they were launched.

Many car makers have fitted this technology ahead of time, though, so one way or another, it’s likely you will come across ISA in the near future if you haven’t already. Our guide will talk you through exactly what ISA is, how it works, if it is the same as a speed limiter, and why it’s being introduced.

Will the UK have to follow EU speed limiter rules?

The UK is no longer part of the EU and therefore doesn’t have to follow these rules, and despite the law coming into force in EU countries any day now, the UK Government has yet to decide whether it will follow them.

The Department for Transport told carwow: “The UK’s departure from the EU provides us with the platform to capitalise on our regulatory freedoms. We’re currently considering the vehicle safety provisions included in the EU’s General Safety Regulation and will implement requirements that are appropriate for Great Britain and improve road safety.”

Regardless of whether the UK adopts the EU’s rules onto its own statute books, car makers may decide not to change the systems fitted to their cars just for UK buyers. We may therefore find that we adopt the rules in practical terms, if not legal ones.

Why are speed limiters being made mandatory?

Speeding is a controversial topic. UK speed limits are widely posted and legally binding, but compliance can be poor, with UK Government figures showing 50% of cars speed in 30mph zones.

Authorities often allow some leeway where speeding is concerned: many UK police forces set fixed speed cameras with a ‘10% +2mph’ threshold, meaning you may not be penalised if you are travelling at under 68mph in a 60mph zone, for example.

Yet safety regulators are almost unanimous on the dangers posed by speed. Research from the European Transport Safety Council, or ETSC, (an independent safety body that advises the European parliament on this topic) shows that around a third of all road fatalities are caused by excessive speed, while the organisation says speed is an “aggravating factor in most collisions”.

What are the different types of speed limiters?

Car makers can choose between three types of ISA in order to meet the EU’s regulations:

Informative or advisory ISA This shows a warning symbol or sounds an alert if you break the speed limit, while also displaying what the limit is.

Supportive or warning ISA This increases the upward pressure on the accelerator pedal, making it harder to press, if you break the speed limit.

Intervening or mandatory ISA This reduces engine power, slowing the car down to the limit, if you are speeding. The system does not apply the brakes at all, so the reduction in speed is gradual.

Car makers can choose which of these systems they fit, but the ETSC says intervening ISA is “the most effective and appreciated” system.

Check out the safest cars on sale today

Many car makers have already fitted systems similar to intervening ISA. Ford introduced such a system in 2015, although back then it was not on by default when the car was started, instead having to be activated by the driver.

Do note that ISA is different from the more old fashioned, basic speed limiters that have been offered on cars for many years, often in conjunction with cruise control.

Basic speed limiters have to be activated by the driver, who then selects the speed they want the car to not exceed. Like ISA they can be overridden by pressing down hard on the accelerator, typically past a ‘kickdown’ point, where a second level of resistance is present on the pedal. Unlike ISA, basic limiters do not read road signs, with their limit set by the driver.

How does a car speed limiter work?

Intelligent Speed Assistance systems determine the speed limit in one of three ways: they either use cameras that can recognise traffic signs, GPS satellite location technology that can pinpoint where you are and what the limit is, or a combination of these two methods.

Head here for the latest deals from carwow

Older systems had to be activated by the driver, typically by pressing a button on the car’s steering wheel.

The systems mandated by the EU, however, must activate every time the car is started. Legislation dictates drivers must be able to manually turn the systems off, though.

The legislation mandates, however, that as well as being able to turn the system off, the driver must be able to override the systems when they are already switched on. If a supportive system is fitted, the driver simply needs to push the accelerator pedal down further to exceed it.

Drivers are able to override intervening or mandatory systems in a similar way: pressing the accelerator further down will cause the car to accelerate past the limit.

Why speed limiters could become even stricter

The ETSC, which has close links to the European Commission, said it was “disappointed” that car makers are allowed to fit different ISA systems, preferring the intervening type, which cuts engine power if a speed limit is broken.

The ETSC recommended ISA systems should have a full on/off switch “to aid public acceptance at introduction”, indicating that once broad acceptance of the systems has been achieved, drivers could lose the option of switching them off.

Why are speed limiters controversial?

Given how many drivers break the speed limit, it is perhaps unsurprising that the introduction of Intelligent Speed Assist has met resistance in some quarters.

The Minister for Brexit, Jacob Rees-Mogg, said: “We may be putting speed limiters on people’s cars because the EU’s doing it. Because the EU’s doing it is no argument for doing anything anymore. We want to get away from this mentality.” Another Conservative MP referred to the technology as “Big Brother in your cockpit”.

Away from politics, Intelligent Speed Assistance, like all systems, can go wrong. One of the more common issues that can occur is for ISA to read a speed limit sign from a slip road, and think this applies to the main road the driver is on, which may have a different limit.

Academic research on the subject has found that the advantages of ISA outweigh the disadvantages, but some potential negative aspects remain. These include:

How do I know if my car has a speed limiter?

The legislation surrounding Intelligent Speed Assistance dictates that “the driver should always be made aware of whether the system is on or off”, so it will be fairly easy to tell if your car has ISA.

The best way to find out if your car has ISA is to look in your owner’s manual. Drivers who never break the speed limit may never know they have ISA they do so, while those who do speed may find out when their car beeps or flashes an alert at them, or reduces its velocity, when a limit is broken.

Cars with ISA must display the prevailing speed limit on the dashboard, but note this is also a function of Traffic Sign Recognition, which uses cameras to read and display road signs on a driver’s digital display, without taking action.

Car dashboard symbols and meanings
The best alternatives to the Ford Kuga
What to do if you break down on the motorway
Electric car charger installation cost
Car recalls explained
10 loud cars on sale right now
Electric car conversion: How to convert a car to electric
10 spacious cars with the best driver and rear legroom
Selling a deceased person’s car
Find the cheapest petrol prices – UK price comparison
What is limp mode? Symptoms, causes, and how to fix it
Hydrogen Cars Explained
Types of Electric Cars
10 best sleeper cars
10 best alternatives to the Volkswagen Polo