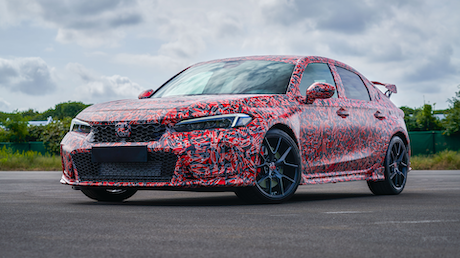 The new Honda Civic Type R is already setting lap records, and you won’t have to wait long to see this all-new hot hatch in the metal – Honda plans to reveal it this summer. Read on for full details.

A new Honda Civic Type R is on the way, and the Japanese manufacturer has released images of a heavily camouflaged prototype — giving you a first official look at this front-wheel-drive alternative to the likes of the Mercedes-AMG A35 and Volkswagen Golf R.

Honda has confirmed the new car’s reveal is scheduled for summer 2022, potentially soon after a (camouflaged) public appearance at the Honda-sponsored Indy 200 race in July.

Yes, the Japanese firm has a few new electric cars and hybrids to launch first, so fans of front-wheel-drive hot hatches will have to wait a bit longer…

It’s good news if you like the current Civic Type R’s eye-popping design and numerous boy-racer bits, because the all-new model is shaping up to look just as dramatic.

Even though it’s covered in a thick camouflage wrap, you can tell the new Honda Civic Type R is shaping up to be one of the wildest-looking hot hatches you can buy. Its numerous wings, fins and spoilers make the Volkswagen Golf R look sensible and the Audi S3 almost dull…

Check out these Golf R deals

You can easily spot the gaping front grille on this prototype, along with aggressive creases and recessed bumper trims that’ll likely come with contrasting black and red trim on the finished car, as shown in the rendered image above.

The wheel arches and side skirts have been stretched outwards and this prototype’s been fitted with a fresh set of black alloy wheels.

Honda’s made a few significant changes at the back, too. The new car’s rear wing comes with skeletal metal supports instead of chunky solid items like today’s Type R, and the new full-width brake light helps make the car look lower, wider and meaner than ever.

Thankfully, the current car’s signature triple-exhaust system has been carried over, albeit with a larger-than-ever central pipe.

As with all previous Honda Civic Type Rs, the new model’s interior will be based on the regular hatchback but will add a host of sporty upgrades.

Expect the new car to come with plenty of suede-like Alcantara trim on the dashboard and steering wheel, along with plenty of red highlights to match a set of new red and black bucket seats.

A brushed titanium gear knob is also expected to feature – as in almost all previous hot Civics, including the current-generation car (shown above.)

It’s likely the new car will draw most of its grin-inducing power from a 2.0-litre turbocharged four-cylinder petrol engine, with power being sent to the front wheels through a six-speed manual gearbox. This is the same basic recipe as today’s car. If it ain’t broke…

Check out the best hot hatches on sale

However, to help improve fuel economy (and help Honda reach its target of electrifying all its new cars sold in Europe by the end of 2022), it’s likely the new Civic Type R could come with a new mild-hybrid system.

This could see a small generator fitted to allow the car to cut the engine sooner when you cruise to a stop, and give it a slight boost when you accelerate hard.

Power could see a rise from the current 320hp to as much as 350hp, with a 0-60mph time of close to five seconds likely.

The new car is shaping up to be quicker through the corners than the old car, too. Honda has confirmed that a prototype Civic Type R has already beaten the front-wheel-drive lap record at Japan’s Suzuka race track.

The previous record was set by the stripped-out Civic Type R Limited. Watch Mat’s review (above) to get all the info on that exclusive limited-edition hardcore hot hatch.

The next-generation Honda Civic Type R will be revealed in summer 2022 and it’s expected to go on sale later this year.

It won’t be cheap, however – especially if Honda decides to add hybrid tech to this new model. Expect the next Civic Type R to set you back from close to £40,000.

Check out deals on the current Honda Civic Type R. If you’re looking for an easy way to change your car, you can do just that through carwow. You can sell your car and get a great discount on a new one, all from the comfort of your sofa. Tap the button below to get started.