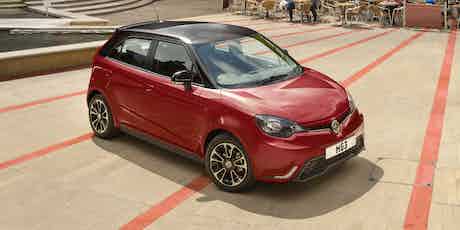 MG has fitted a new EU6 compliant engine to the MG3, reducing fuel consumption and emissions. Does this make it a tempting prospect?

The MG3 supermini has been upgraded with a refreshed, more efficient engine and slightly revised exterior styling. MG is hoping that these – albeit slight – changes will help the MG3 to compete with other cheap superminis including the Dacia Sandero.

Although the basic 1.5-litre petrol engine remains, it has been brought up to more modern standards to comply with EU6 regulations. If you like the look of this value-packed supermini, put the MG3 in our car configurator to let carwow find you a great deal.

Thanks to the modified engine, the MG3 now emits 124g/km of CO2 – down from 136. This figure is still significantly behind many supermini competitors – some of which now emit less than 99g/km – but is enough to move the MG3 to the next road tax band down.

A stop/start system has been added that should help drivers to save money on fuel. The old model could only manage 48.7mpg so, if running costs are your main priority, you may be better off with a more efficient alternative.

The MG3’s front grille now sports chrome detailing to help set it apart from the outgoing model but no other design changes have been made. New paint colour combinations have been added to the range, however, including a new white or black contrasting roof.

The latest MG3 is available to order from mid-November with the entry-level model costing £8,399. Customers looking for a top-of-the-range model will have to spend £10,999 but, beside leather seats, will be afforded few additional luxuries.

Save money on your new MG3

If you’re after a cheap and cheerful new car, put the MG3 into our car configurator to let carwow find you a great deal. If you’re not sure which is the car for you, our car chooser tool and deals page are here to help.