News All new Audi R8 revealed – how does it compare to the old one?

All new Audi R8 revealed – how does it compare to the old one? 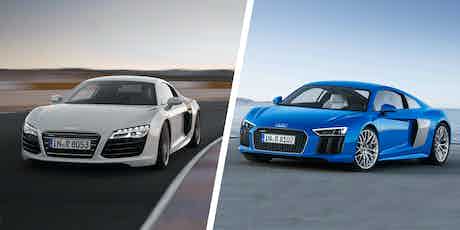 The Audi R8 supercar is now V10 only, and an advanced new chassis will help it compete with the Ferrari 488 GTB and Mclaren 650S

Audi has revealed the latest generation of the R8 supercar. The firm’s answer to the Lamborghini Huracan and the Ferrari 488 is set to sprint from 0-62mph in 3.2 seconds and hit a top speed of 205mph.

The technology under the skin is undoubtedly fascinating, though some might feel the changes to the outside might be a little harder to spot. We’ve taken a look at what sets it apart from the previous version.

Audi R8 exterior – all new (but subtly so)

At first glance, it might seem like not much has changed on the outside, and Audi has opted for a steady evolution of the old car’s looks as opposed to a dramatic redesign. A perfectly sensible decision, considering how popular the old model was.

As a result, the front looks very familiar, though everything has been sharpened up, resulting in a squarer stance not as sleek as the outgoing model. The grille now features the more distinct hexagonal shape of Audi’s most recent releases, and the shape of the headlights and air intakes trace around its edges. Those lights are full LED units as standard, with the option to upgrade them to laser units, as seen on the previous R8 LMX.

The side features an adoption of the distinctive blade air vent design. Where it previously ran uninterrupted from the base of the rear door edge to the slope of the roof, it is now split into two, with the air vent and C pillar section finished in a contrasting shade from the rest of the body.

As with the front, the rear looks more angular than before. Gone are the oval-shaped tailpipes of the old car, replaced with trapezoid-shaped items. The most focused V10 Plus model features a fixed rear wing and door mirrors finished in black.

The all new cabin takes inspiration from the old model, yet delivers an all-round more modern look. A new variant of the flat-bottomed steering wheel catches the eye, and it sits ahead of a full-LCD instrument cluster, a variant of which already features in the Lamborghini Huracan and Audi TT.

Smaller central air vents aren’t angled towards the driver as much as in the old model. It’s a subtle change, but when you combine this with the smaller and less cluttered centre console, it makes the cabin feel more open. The central transmission tunnel is wide but appears lower than before, and houses the MMI (Multimedia Interface) controls for the infotainmant and navigation functions.

The greatest change to the R8 comes in the form of the chassis. Developed alongside the Huracan, the use of aluminium and carbon fibre reinforced plastics not only endow the latest R8 a more rigid body than before (to the tune of approximately 40 per cent), but despite more generous equipment levels, reduces overall weight by 50 kilos.

Aerodynamic tweaks include a flat underbody floor, helping the air to flow more efficiently to the diffuser which sits at the base of the rear bumper, boosting downforce, and therefore cornering grip.

Audi R8 engines – V10 only, but more power and efficiency

The V8 that featured in the old model is no more. Instead, the latest model features a development of the old V10, in two states of tune. The ‘entry level’ model offers 540hp from it’s 5.2 litre capacity, which is enough to hit 62 mph from rest in 3.5 seconds and just break the 200mph barrier. The more potent 205mph V10 Plus deploys 610hp through Audi’s quattro all-wheel drive system and hits 62mph from rest in 3.2 seconds. In normal operation, power is sent just to the rears, but when any slip is detected, torque can be sent forwards to improve traction. As with the quattro system, both versions of the engine are paired with an semi-automatic gearbox with steering-wheel-mounted paddles.

Not only is the R8 more potent than before, but it is more efficient, too. Thanks to the inclusion of a new ignition system and ‘cylinder on demand‘ technology – which shuts down half of the engines cylinders to save fuel when cruising – the new R8 is capable of approximately 24mpg. That’s five mpg better than the V10 in the original model.

Ever since the first generation of the R8 has been released, the TT has always been seen as the low-fat alternative to a full-blown supercar. From a styling point of view, it’s easy to see why, the latest R8 looks like a wider, more extreme version of the baby coupe. The same hexagonal front grille is flanked by narrow and aggressive-looking headlights. The R8 gains larger air intakes, not only at the front, but at the sides too, where air needs to be fed into the engine mounted behind the driver (as opposed to the smaller, front mounted units of the TT).

The cheaper TT does share some similar tech with the R8, such as the quattro system and the fantastic digital readout for the dials. The cabin doesn’t really lose out much in the style stakes to the pricier alternative either – the TT possesses one of the finest cabins money can buy. For those who enjoy wind-in-the-hair thrills, the TT is even available as a Roadster. Although no details of a drop-top ‘Spyder’ version of the R8 has been made official yet, expect one in the near future.

The new R8 will be available from Summer 2015. Although UK prices are yet to be confirmed, expect them to start from about £130,000.