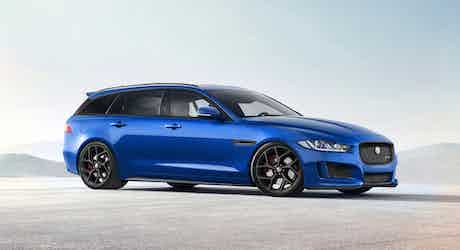 A 490hp Jaguar XE-R Sportbrake could be on the cards, read all the latest here

The Jaguar XE has received rave reviews, and critics say it’s one of the best small executive cars on the market.

Now it’s on sale, it’s time to look forward to rumours that Jaguar is preparing an estate version, called the Sportbrake. Read on for a full rundown of these rumours, along with some carwow-exclusive renders of what it could look like.

Will there be an XE R-S sports model?

Rumours of a Jaguar XE estate mean only one thing to enthusiasts – the company is also likely to offer a super estate, called the Jaguar XE-R Sportbrake. It would rival models such as the Audi RS4 and Mercedes AMG C63.

It’s tipped to get the same 5.0-litre 490hp supercharged V8 that’s currently fitted to the F-Type sports car. When fitted with the company’s four-wheel drive (a recent addition to the F-Type range) it would give the XE-R devastating all-weather performance. Not to mention a sub-four second 0-60mph time and a de-limited top speed of more than 180mph.

Using the same eight-speed automatic gearbox that’s used in the rest of the range – but tuned for performance – would ensure the luxury theme expected of a Jaguar remains. However, the XE-R is also bound to get more powerful brakes, stiffened suspension and an electronically controlled limited-slip differential for more cornering grip. Carrying over the adaptive dampers already fitted to the XE S would also allow owners to choose between comfort and a sporty ride.

An aggressive body kit, flared wheelarches (to accommodate the bigger brakes) and a working rear diffuser with integrated quad exhaust pipes would let the rest of the world know your XE-R is no ordinary Sportbrake

The car is expected to go on sale soon after the XE-R saloon is revealed early in 2016 and will cost close to the £61,000 Mercedes asks for its C63 Estate.

With its new XE, Jaguar is taking the fight to heavyweight German rivals such as the BMW 3 Series, Mercedes C-Class and Audi A4. Seeing as all tof them have an estate version it is safe to assume, Jaguar will be making and estate XE and it most certainly will be called the Sportbrake. Our exclusive images give an idea of how the car could look.

From the front, the Sportbrake will be much like the saloon thanks to its aggressive grille and slim-line headlights. It’ll also have the same ‘pulled-back cabin’ side profile, which is designed to make the car look more sporty and purposeful. The Sportbrake body on the  larger XF transformed the car’s styling and an estate version of the XE could well do the same for the saloon it is based on.

The Sportbrake will come with exactly the same engines as those found in the regular  car. These include two four-cylinder diesel engines in 161 and 178hp guises. The more powerful of the two is capable of economy figures above 67mpg and is only £20 to tax per year. The 161hp version scrapes under the 100g/km CO2 figure (so is free to tax) and can manage 74.3mpg, despite being capable of sprinting to 62mph from a standstill in 8.4 seconds.

The petrol engines on offer will be two high-tech Ingenium four-cylinder turbo units, displacing 197 and 237hp respectfully. The third unit is a 335hp 3.0-litre supercharged V6 which is the same unit found in the F-Type sports car.

Jaguar is tipped to squeeze its powerful 5.0-litre supercharged V8 under the bonnet of the XE saloon and a Sportbrake so equipped would be an obvious rival for the Audi RS4 Avant.

The ordinary XE saloon is a great driving car and the estate should be, too. The saloon, while not as sharp, as agile, or as playful as the class-leading 3-Series strikes a great balance between comfort and sportiness which makes it a great all-rounder.

The interior will be unchanged from the XE saloon. Its cockpit is something to behold with lots of high-quality materials and design cues from the rest of the Jaguar range. F-Type included. Like the saloon, there are likely to be five trim options to choose from: SE, Prestige, Portfolio, R-Sport and sporty S.

The estate might arguably be a better drivers’ car than the saloon. The reason being that it’s most likely the Jaguar will give the XE estate the same alterations as they did on the XF Sportbrake. This includes self-levelling rear suspension with adaptive dampers and air suspension at the rear, replacing ordinary steel springs. TV show Fifth Gear found that the XF Sportbrake was not only more comfortable than the saloon, but also quicker on track.

The SE will be the most basic trim, but in the saloon car that still means a list of standard equipment that includes sat-nav, auto lights and wipers, keyless entry, an eight-inch touchscreen, and blue interior mood lighting.

Expect the price for the Sportback to start off around the £28,000 mark, which will make it more expensive than a BMW 3-Series Touring and Audi A4 Avant estate, but just slightly cheaper than a Mercedes-Benz C-Class estate. The new model should get its big reveal by the end of this year (2015) or the beginning of next.