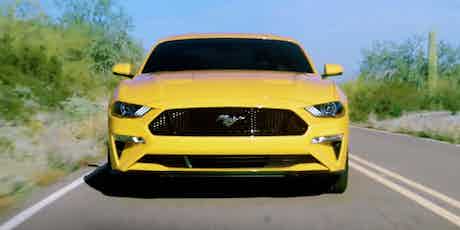 The revised 2018 Ford Mustang has been leaked online but are its new looks a massive improvement or a facelift too far? Read on for more…

Footage of the Ford Mustang’s latest facelift has leaked online before the updated car makes its official debut in late 2017. A bucketful of styling tweaks and new body panels are among the changes we can spot in a video from the Mustang6G website.

It appears Ford’s decided to ditch the “if it isn’t broken, don’t fix it” mantra and dive head first into altering nearly every part of the old Mustang’s handsome bodywork.

The new car features more slanted headlights, a wider grille, sharply tapering intakes with built-in fog lights and a gaping opening above a new front splitter. The illuminated strakes in each headlight have, thankfully, been carried over mostly unchanged.

The new car’s rear has fallen victim to the over enthusiastic-design team, too. A spoiler with four support struts (how much weight does it need to hold?) and a set of curvier brake lights give the 2018 car a more fussy appearance than the model it’ll replace.

A tell-tale ‘5.0’ badge on the new Mustang’s wing suggests it’ll be fitted with the same 5.0-litre V8 engine as the outgoing car. It’ll also be offered with an all-new 10-speed automatic gearbox that’s already seen service in the latest Chevrolet Camaro and the Ford F150 pickup truck. Reportedly, this unit won’t be offered on 2.3-litre turbocharged four-cylinder models, however.

The new car’s expected be offered with magnetically adjustable shock absorbers to help it strike the perfect balance between comfortable motorway cruising and thrilling back-road blasts. There’s been no word on whether this system will be fitted as standard, however.

Ford hasn’t confirmed how much the new Mustang will cost but it’ll probably set you back between £30,000 and £40,000 depending on specification. It should make it’s public debut in late 2017 and go on sale in the UK before 2018.