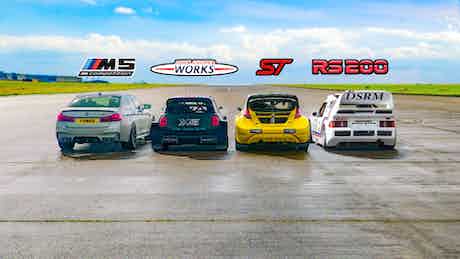 Taming a 1,000hp tuned BMW is all in a day’s work for Mat, but today, he has his work cut out because he’ll be pitching an Evolve-fettled M5 against three thoroughbred rallycross cars from MINI and Ford.

Tap the video to watch the race:

However, none of these cars is quite what it seems. For starters, the BMW M5 Competition we have here is one of the fastest cars ever to feature in a carwow drag race.

It’s already embarrassed plenty of supercars, including a Ferrari 488 Pista and a Porsche 911 Turbo S, thanks to a raft of mechanical and electronic upgrades from tuning wizards Evolve.

Its 4.4-litre twin-turbo V8 has gone from a mere 625hp in stock form, to pumping out 1,000hp –  you know things are about to get interesting when a power figure comes with a comma… It sends this torrent of oomph to all four wheels through a (hardworking) eight-speed automatic gearbox.

Unfortunately, all this power renders the M5’s launch control a bit dumbstruck – so Mat and Yianni (yes, they’re sharing a car for the first time) will have to take the reins themselves. Keeping wheelspin under control will be nothing more than their right feet.

Next to this four-door powerhouse are three full-blown rallycross cars. First up, we have a British rallycross-spec Ford Fiesta – a four-wheel-drive mini-monster that has as much in common with a normal family hatchback as you do.

Under its lightweight bonnet and behind those flared wheel arches sit a 550hp 2.0-litre turbocharged four-cylinder engine, a racing sequential gearbox and a rally-spec four-wheel-drive system.

Despite looking like it graduated from the ‘Max Power’ school of car modifications, this is no cheap-and-cheerful racer – it’ll set you back £150,000. That’s as-near-as-makes-no-difference the same as the BMW M5 (thanks to a £120k starting price and £30k worth of Evolve’s tuning prowess lurking under the bonnet.)

If you thought that was a lot for a racy hatchback, wait ’til you see what’s next… Sure, it looks like a MINI (well, something that used to be a MINI), but this World Rallycross car represents a £600,000 investment with the aim of getting from point A to Point B as quickly as possible.

It, too, weighs 1,300kg and has a 2.0-litre four-cylinder engine, four-wheel drive and a sequential gearbox, but the MINI’s 600hp figure is 50hp up on the Fiesta. At least they weigh the same…

We’re going back to the eighties for our fourth competitor, in the form of a Ford RS200. This stunning mid-engined wedge doesn’t just have the largest wing we’ve ever seen in a carwow video, but some of the best racing pedigree, too.

This car was designed to compete in Group B rallying, but had to turn its sideways skills to rallycross when Group B was considered ‘too dangerous’.

Its 2.1-litre four-cylinder turbocharged engine cranks out 500hp, but the brave soul in the driver’s seat has to meter this out using not just both hands, but both feet. Yes, unlike the other cars in this race, the RS200 has a six-speed manual gearbox.

It weighs the same as the MINI and Fiesta, but splits the two on price. Fancy parking one of these ’80s wonders in your garage? Well, you’ll have to sell off a few Miami-Vice white suits, because it’ll set you back £400,000…

Think you know which car will win? Watch the race to find out.