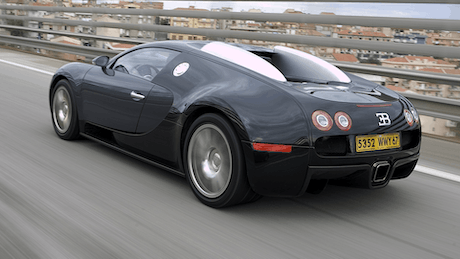 Fire up MSN and put on your double denim, it’s time for a nostalgia trip back to the 2000s.

In a time when technology was beginning to take over cars, some of the finest work ever from manufacturers came to light in the ‘00s. In many cases, this changed the landscape of cars forever.

But what were the absolute best of the decade? Here’s carwow’s pick of the 10 best cars from the 2000s.

The Bugatti Veyron was the Concorde moment for automotive engineering. Not only was it the first production car capable of breaking the 250mph barrier, but it could do so in lavish Bentley-esque comfort.

Not content with just the 253mph coupe though, Bugatti span the Veyron off into several special editions. The peak was the Super Sport — a 1,200hp no-compromise version capable of 268mph.

If you’re going to name your car after the company’s founder, it’s got to be pretty special. Even more so when the founder in question is the legendary Enzo Ferrari.

Fortunately for the Italian manufacturer, the Ferrari Enzo was just that. This hypercar debuted a new monstrous V12 engine that’s still found (albeit in an evolved form) in the firm’s cars today.

Plus, thanks to some seriously clever aerodynamics, it could power on all the way to 217mph while remaining impressively agile.

What do you do when you have to can a Formula One engine project? In the case of Porsche, you revive it for a supercar that was never meant to happen.

Back in 2000, Porsche decided to build a concept Carrera GT to have a reason to use a stillborn V10 engine project and to bring some attention to its display at the Paris Motor Show.

What it didn’t expect was people to actually want one. But buyers did, and so a legend was born. Its raucous engine was coupled to a sweet old-school manual gearbox, and delivered power to just the rear wheels, creating one of the best driver’s experiences of the decade.

When Nissan turned the humble Skyline into the fire-breathing GT-R, it produced an earth-shattering supercar killer.

So when it decided to spin ‘Godzilla’ off into a completely separate model, it was a risky step. Though, it’s one that paid off.

Introduced in 2007, the R35 Nissan GT-R took that supercar-slayer title and cranked it right up to 11. Here was a car that set you back about £55,000, yet could decimate supercars costing twice the price.

In fact, the R35 was so strong that it’s still in production today (albeit with its days numbered). It’s been so prevalent that it’s easy to forget just how groundbreaking it was upon its arrival.

Though the Evo IX wasn’t the final Evo, it’s widely seen as the last of the true rally-bred Japanese super-saloons.

The Evo IX, however, retained that hardcore boost-heavy character of the original homologations specials only with increased performance to keep even the hottest of supercars on their toes.

How does another road-going rally car fare?

Its peak came with the (deep breath) Mitsubishi Lancer Evolution IX MR FQ-360 by HKS. By the time you’ve read that, the car would’ve blitzed 60mph and be on its way to 100mph easily.

As well as more power, the FQ-360 got a host of chassis tweaks to give it super-sharp handling and enough grip to rotate the earth underneath it. A fitting spiritual end to a legend.

Tribute acts are rarely as memorable as the real thing, but the Ford GT broke that convention.

Designed to honour the multiple Le Mans-winning Ford GT40s of the ‘60s, this GT was here to beat Ferrari again — only this time on the road.

Its monstrous V8 paired wonderfully with an aluminium chassis, creating a scintillating driving experience. A far cry from the European cliches of American cars being big, heavy barges.

The second-generation Honda Civic Type R, the EP3, looks pretty ordinary from the outside. Sure, it got some slightly sporty styling but little to suggest this was anything more than a run-of-the-mill hatchback.

That illusion would be shattered the moment you rang the engine out. Its legendary K20A engine is one of the best ever created, delivering a then-astonishing 200hp through a neatly-sorted chassis.

This is probably the most obtainable car on this list, but prices are only going up…

Rumour has it that Volkswagen caught wind of Renault planning a ‘three-litre Clio’ at the 1998 Paris Motor Show.

Understanding this to be a Clio that could return three litres per 100km, it put together the VW Lupo 3L — an ultra-efficient hatchback that would ensure they weren’t one-upped.

What it wasn’t prepared for was a wide-bodied Renault Clio with a Laguna V6 shoehorned in place of the rear seats. When it made it to production in 2001, the Clio V6 didn’t disappoint.

Though regarded as quite spikey to drive, the V6 would be honed and refined to become one of (if not the) coolest hot hatches to ever see the light of day.

Based on the regular M3, serious efforts were made to shed 110kg. This included a carbon-fibre roof (which was space-age at the time), a composite bodykit, thinner glass and even a cardboard boot floor.

Paired with a freer-breathing engine, the package was the most sublime version of the M3 yet. Hailed for its sharp handling and even sweet engine, it’s a true modern legend.

After years of disappointing Golf GTIs, VW finally got it right again for the fifth generation.

The VW Golf GTI Mk5 is widely regarded as the best of its kind, pairing a seriously tidy chassis and a remarkable engine. It helped that it looked seriously cool, too.

Plus, when you wanted to use it sensibly, it retained all the normality of the regular Golf despite its stature as a serious driver’s car. It truly balanced the best of both worlds, bringing the Golf GTI status quo back in order.

Looking for the easy way to change your car? You can sell your old car with carwow for the best price, and get great offers on a new car from carwow’s trusted dealers, all from the comfort of your sofa. Tap the button below to get started today.