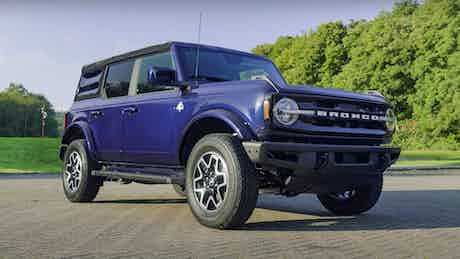 The new Ford Bronco is the first serious off-roader Ford has made in a long time – but was it worth the wait? Mat gets behind the wheel of this revived all-American SUV to find out.

At a glance, the new Ford Bronco looks like a big box with some wheels on it. But, that’s not necessarily a bad thing… After all, the latest Land Rover Defender, Mercedes G-Class and Suzuki Jimny have shown that a few retro touches can make even the squarest of SUVs look pretty eye-catching.

But, how does the Bronco compare? Well, it comes kitted out with the obligatory black bumpers, towing hooks and a boot-mounted spare wheel, but this particular Bronco is a convertible – none of those other SUVs come with the option of a folding fabric roof.

It’s also a high-spec ‘Outer Banks’ model, meaning it comes with painted wheel arch trims instead of plain plastic ones – something best avoided if you plan to do some serious hard-core off-roading.

The Ford Bronco’s interior looks just as boxy as its exterior. There’s a flat-faced dashboard with built in touchscreen display, and all the controls, switches and knobs have been made deliberately chunky so you can use them while wearing gloves.

There’s ample space in the back for lofty Stetson-wearing passengers and the wide, square boot is fairly easy to load, although the hardtop’s boot opening is larger than the one on this convertible.

Four-cylinder cars come with the option of a manual gearbox but the V6 gets a 10-speed automatic gearbox as standard. Both cars come with switchable four-wheel drive that can selectively send power to just the rear wheels when you’re driving on-road to save fuel.

This Bronco comes with Ford’s interestingly named GOAT mode. No, that doesn’t stand for ‘Greatest Of All Time’ – rather it means ‘Goes Over Any Terrain’.

Like the new G-Class, the Ford Bronco comes with a ladder chassis, independent front suspension and a solid rear axle. As a result, it feels much less wayward to drive on the road than a Jeep Wrangler but stills shimmies and shakes slightly over larger potholes.

That said, if you plan to spend most of your time driving in town, the Bronco won’t give you a headache thanks to its raised ride height and large windows that make it very easy to see out of.

If you’re looking to buy a Ford Bronco in the United States – just go ahead and do it. It’s harder to justify in the UK, because the cost of import taxes, shipping and a few necessary modifications can push the price up to £85,000. But, if you’re looking for something that’s a bit different from the usual crop of Jeep Wranglers and Land Rover Defenders, it could be right up your street.

If you’re looking for a new off-roader, check out the best 4×4 cars on sale now or check out the latest new car deals available through carwow.

10 of the best 60s cars
Road tax on electric cars: what you need to know
Drag race: Porsche 911 Turbo S vs McLaren 720S vs Lamborghini Aventador SVJ
VW Tiguan vs Skoda Karoq – which is best?
What does the engine management light mean?
Skoda Karoq vs Skoda Kodiaq – which is best?
8 of the best home EV chargers
Ford Titanium: what is it and is it worth it?
Ford EcoBlue engines explained
The best alternatives to the Ford Kuga
How to tow a car
Box junction rules
Drag race: Ford Mustang CS500 vs Mini Hayabusa
carwow 1/4-mile (400m) drag-race leaderboard
Volkswagen Passat vs Skoda Octavia