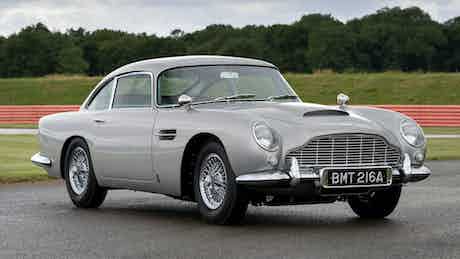 A new Bond film is about to release and, well, is there a better excuse to take a look at the best James Bond cars ever?

Well, that’s exactly what you’re here for. Read on to see if you agree, or if the release of No Time To Die really changes this.

1. Lotus Esprit – The Spy Who Loved Me

James Bond may be best known for his love of Aston Martins (and you’ll find plenty of them on this list), but the coolest car he ever drove came from another British sports car manufacturer — Lotus.

The Lotus Esprit in The Spy Who Loved Me blows every other Bond out of the water. Perhaps quite literally, being able to turn into a submarine and whatnot.

Oh and Elon Musk now owns the exact car from the film. Whether or not that makes it cooler is up to you…

Although it places as runner up on this list, the Aston Martin DB5 from Goldfinger is probably the most iconic of all of James Bond’s cars.

Not only was it the first Bond Aston Martin, but probably the most gadget-laden too. Take the revolving licence plate for example, or the machine guns hidden behind the front indicators. There’s even an ejector seat.

You can even buy one if you want. Aston Martin is currently working on a continuation run of replica cars of the original Goldfinger DB5. You’ll probably need to be James Bond levels of rich as well, mind.

The Toyota 2000GT was cool well before it became a Bond car, but the spy film series found a rather unique place in the Japanese sports car’s history.

Originally, the 2000GT in You Only Live Twice was set to be a hard-top — only then-Bond Sean Connery was too tall to fit in it.

Thus, a one-off convertible was produced to accommodate, and (perhaps upsettingly) it never made production.

BMW’s made a handful of appearances in Bond film’s in the ‘90s, but most memorable was the BMW Z8 of The World Is Not Enough.

This sleek-looking convertible was appropriately equipped with titanium armour, remote driving capabilities and even surface-to-air missiles.

It met an untimely end at the hands of a circular saw though, cutting it in half.

Aston Martins have become so synonymous with James Bond that there’s even been a whole model made just for the film.

Just 10 examples of the Aston Martin DB10 ever saw the light of day, with eight of those used as film cars.

Bond’s version (well, the one he stole in Spectre) was equipped with flamethrowers, a rear machine gun and a head-up display. You’ll only find one of those things on any road-going Aston Martin at the moment…

While the best Bond cars are typically luxury machines brimmed with gadgets, this Citroen 2CV has none of that.

It did play a starring role in the iconic chase scene in For Your Eyes Only though, surviving being riddled with bullets and even rolling down a hill.

If we roll all the way back to the very origins of James Bond, and the book version of Casino Royale from 1953, you’ll find the first-ever Bond car was quite unlike anything since.

The spy’s choice of vehicle was a Bentley 4 ½ litre, better known as a Bentley Blower. In the book, it’s said Bond bought the Bentley in 1933 before stowing it away safely during the course of WWII.

In contrast to the exquisite and luxurious lifestyle James Bond lives is the Ford Mustang Mach 1 he drives in Diamonds Are Forever.

Proving the choice for a getaway through Las Vegas, the brash Mustang was an effective vehicle if quite an antithesis.

You can’t buy an Aston Martin Valhalla, but you can see James Bond own one in the latest film.

Emphasis on ‘own’, as it sounds as though there are no driving scenes with the new Aston supercar in the film. Maybe if you go see it, you’ll find out for sure.

Land Rover produced a handful of Defenders for 2015’s Spectre, with the cars officially known as ‘SVX Concept’.

These beefed-up 4x4s don’t play a starring role, but they have a cult following — spawning plenty of tribute cars. Which, speaking of, you can go watch Mat drive one of below…