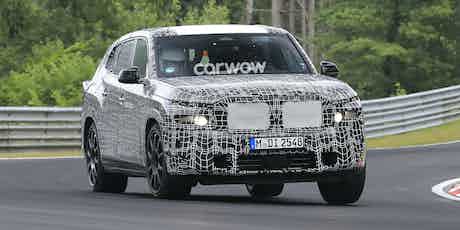 BMW has been spotted testing a new coupe version of the BMW X7, called the X8. See the latest spyshots, check out an exclusive rendering and read more about this upcoming SUV here…

More spyshots of the upcoming BMW X8 have emerged, with the coupe-styled SUV expected to go on sale in 2022.

It’ll be built using the same underpinnings as the BMW X7 but offer a more aggressive design and further performance options including a future X8M that’ll stack up against the likes of the Audi RSQ8 and Mercedes-AMG GLE 63 Coupe. Read on for full details and exclusive renderings of this new range-topping SUV.

It’s pretty apparent the BMW X8 car has a more aggressive design than the X7 on which it’s based – most noticeably because of its coupe-like sloped roofline.

If you naively had fingers crossed the X8 would do away with BMW’s huge kidney grilles, you’re out of luck – it’s looking like they’ll be bigger than ever.

Based on spyshots seen so far, this exclusive render gives you an idea of what the new BMW X8 could look like when it arrives in 2022.

The grille here has been blackened out to add to the sportier look the X8 will be going for, plus there’s an even more aggressive bumper design than you get on today’s X7. Unlike that car, the X8’s roofline slopes off towards the back to give it a coupe-SUV silhouette.

The camouflaged test-car shown in photos throughout appears to be fitted with temporary headlights – similar to the ones visible on prototype versions of the upcoming BMW i7 electric saloon. Large LED lamps with BMW’s signature daytime-running lights will be fitted to the finished car.

The back end of this new BMW X8 is very well hidden under the camouflage wrap, but it appears as though the brake lights will be equally as wide and as slim as those fitted to the X7.

New images of the car show it with stacked exhaust exits for the first time. It’s a typical trait of M cars to have a quad-exit exhaust, so this may be that version in testing (making it a hybrid too, but we’ll get to that…), though the layout here is unusual for the manufacturer. It remains to be seen if this will carry over to production.

The BMW X8 is bound to be offered with the full range of engine options that are currently available in the X7. That means a brace of six-cylinder petrol and diesel engines for entry-level models a version of the stonking 4.4-litre twin-turbo V8 currently offered in the X7 M50i for mid-range X8s.

It’s very likely BMW will build a high-performance X8M model with the 625hp 4.4-litre V8 from of the M5 and M8 Competition. The latest spyshots of the car show it with a ‘hybrid test vehicle’ marking on the side which, combined with the quad-exit exhaust, may suggest this will be the first plug-in hybrid M car.

It’s likely a version of the X5’s 3.0-litre plug-in hybrid setup will be offered in the new X8 as well. In the X5 xDrive45e, this hybrid system produces a total of 389hp thanks to the help of the 111hp electric motor – it’s possible a hybrid X8 may be more powerful still.

The new BMW X8’s interior has not yet been shown, either in spy shots or official images. That said, it’s not expected to look particularly different from the X7’s cabin.

You can bet there’ll be a large infotainment display front and centre with the most up-to-date version of BMW’s iDrive software installed. There’s a chance the new X8 could come with a similar uber-widescreen infotainment system as the latest BMW iX electric car, however.

The rear end will be where the new X8 differs most from the BMW X7. The lower roofline will cut into rear headroom but that should hardly make a difference in a vehicle of this size. The tailgate looks to be a large hatchback-style design, but the images don’t immediately reveal whether it will feature a split opening like that used in the X7.

No pricing details are available as yet, but the X8 range should start from around £80,000 – that’s a few thousand pounds more than the BMW X7. V8 models with a few options could easily top the £100,000 mark, while future X8M models are in with a shout of being the most expensive BMWs on sale. The standard car is expected to go on sale in 2022.

Check out new BMW deals or compare the latest carwow offers on the best luxury SUVs on sale.

Want to keep up with the latest news?