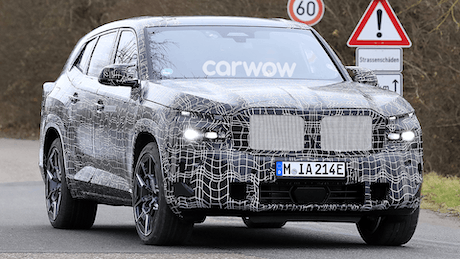 This is the new BMW XM. It’s a 750hp plug-in hybrid SUV that looks set to become one of the quickest, most luxurious and most expensive SUVs on sale when it arrives in 2022. Read on for full details.

The BMW XM will be the first plug-in hybrid super SUV from the German brand. It’s set to pack 750hp from its hybrid V8 engine which is more than you get from an Audi RSQ8, a Porsche Cayenne Turbo S E-Hybrid and even a Lamborghini Urus.

Prototypes of the car have been spotted for the first time since November’s reveal of the XM Concept, sporting less camoflague than any spotted before it.

The new BMW XM will look unlike any other BMW on sale right now and should look very similar to the concept car, shown above.

It’ll be about the size of a BMW X7, but its numerous hard edges and angular surfaces give it the unapologetic brashness of an ultra-posh armoured truck. Even the arches surrounding the 23-inch wheels on the above concept are made of near-straight edges…

The XM Concept also debuted a new grille style for BMW – typically vast, but now highlighted by a pair of look-at-me LED rings. If the images of these prototypes are to go by, that should make it to production as well.

The slim triangular lamps to each side of these facetted nostrils are the XM’s daytime running lights – the main beams are hidden behind a piece of translucent plastic beneath. Expect this design to appear on the upcoming BMW 7 Series replacement, too.

The XM is no less bold at the side, where the concept’s two-tone silver and rose-gold paint scheme is obvious on the panel behind the side windows. Expect the production car to come with a similar iPhone-esque paint job (for a price, of course).

Door handles? They’re hidden in a black strip that runs almost the full length of the BMW XM’s sides.

Things get even bolder at the back, where the XM Concepts stacked exhaust pipes make it look a little like Dracula with an underbite. Prototype shots suggest a somewhat more conventional design for the exits, though.

The dual laser-etched BMW logos on the rear windscreen of the concept are a nod to the classic BMW M1 supercar – the only other M-exclusive car to come from BMW’s tuning division. These are likely to appear on the road car as well, albeit with a less pronounced dip in the roof based on the prototypes.

The BMW XM is set to be the first-ever plug-in hybrid M car. Under the bonnet of the concept is a twin-turbocharged V8 engine (most likely a 4.4-litre unit shared with the M5 and M8, but not confirmed by BMW) and an electric motor that produce a total of 750hp and 1,000Nm of torque. This is expected to carry over into production unchanged.

That’s more power than almost any other SUV on sale (only the Tesla Model X Plaid is more potent). This should mean that the new BMW XM accelerates quicker than the likes of the 650hp Lamborghini Urus and 680hp Porsche Caynne Turbo S E-Hybrid.

BMW has confirmed the XM plug-in hybrid will have 50 miles of electric-only range, hardly the most thrilling stat but handy to know if you live in a congested city centre…

The new BMW XM Concept’s interior is a weird mix of brand-new tech and old-fashioned materials.

Let’s start with the futuristic stuff – such as the curved infotainment touchscreen with M-exclusive graphics and the carbon-fibre dashboard with strands of copper woven throughout.

The central air vents mimic the shape of the BMW M logo and come backlit in blue, purple and red to match the M logo.

In the midst of all this modern loveliness, why did BMW give the XM seats trimmed in leather from (what looks like) a second-hand armchair?

If you thought that was weird, wait until you see the ‘petrol’ coloured fabric seats in the back and the seventies-tastic green shagpile carpet…

How much of this will make it to production remains to be seen. It’s a safe bet to assume the road-going car will go for a more conventional approach.

BMW has confirmed it will start building a production version of the XM concept in late 2022, so you’ll probably get to see the finished XM sometime in the first half of this year.

The new BMW XM could end up costing even more than the £140,000 M5 CS (the most expensive BMW on sale) thanks to its brand-new hybrid system and bespoke coupe body.

Can’t wait for this high-performance XM to go on sale? Compare the best luxury SUVs on sale now or check out the latest BMW offers available through carwow.