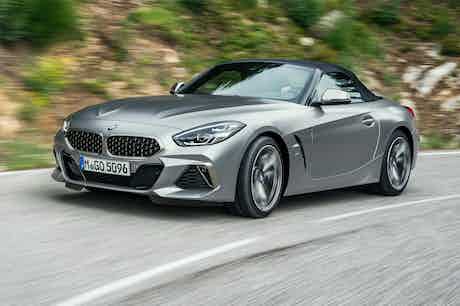 BMW has revealed engines and equipment specifications for its new Porsche Boxster eater – the 2019 BMW Z4. Keep reading for the car’s price, specs and release date

We’ve already seen official pictures of the new BMW Z4 in top-spec M40i guise, a month later we now know it’ll be available with a choice of three engines and trio of trim levels.

While all the fuss surrounding the Z4 has centred around the high-flying Z4 M40i, there will, in fact, be two other models to choose from – all three come with an eight-speed automatic gearbox fitted as standard.

The range kicks off with the sDrive 20i model. Its 2.0-litre petrol engine produces 197hp and 320nm of torque, getting the Z4 from 0-62mph in a spritely 6.6 seconds and on to a top speed of 149mph. It’s also good to know that it should be able to return fuel economy of around 47.1mpg.

One model up has you knocking on the door of the sDrive 30i, which represents the range’s happy medium. Despite the name, it is also a 2.0-litre four-cylinder petrol, but this time tuned to produce 258hp, 400Nm of torque, getting it from 0-62mph in 5.4 seconds. Significant jumps in performance from the 20i model then, yet BMW quotes identical fuel economy figures.

The M40i clearly sits at the top of the tree, it’s the only model to have six-cylinders and its 3.0-litre engine produces 340hp to get the Z4 from 0-62mph in 4.6 seconds. Unsurprisingly, it’s also the most expensive to run with a fuel economy figure of 39.8mpg.

As well as having the most powerful engine, the M40i has a number of upgrades that make it the Z4 for enthusiasts. It comes as standard with Adaptive M Sport Suspension that’s 10mm lower than the standard car’s setup and can be adjusted to be more comfortable on bumpy roads or to better control body lean when you’re pressing on down a twisting country road.

An M Sport differential is also standard – it can send power to the rear wheel with the most grip, allowing you to (on track, of course) slide out of corners in a plume of smoke. Finally, the Z4 M40i comes with powerful M Sport brakes that should cope better with being worked hard on track.
2019 BMW Z4 trim levels

The 2019 BMW Z4 is available with a choice of eight metallic paint finishes and you can pay extra to swap its black folding fabric roof for an Anthracite option with silver effect. The roof is electrically operated and can be closed in ten seconds at speeds of up to 31mph.

The BMW Z4’s dashboard is angled more towards the driver than in other BMWs and the use of fancy trims is limited to the centre console – giving the Z4 a pared down feel that you don’t get on other Z4s.

Z4 30i models come as standard with leather seats with a choice of four colours – Black, Ivory, Cognac and Magma Red – complete with contrast stitching.

You won’t be buying a Z4 for practicality but, for a two-seater sports car, it’s not too bad at all.

Compared to the old model, its seats slide back a further 23mm so you should be able to stretch out even if you’re tall. Electric seats are an option and you can also choose M sports seats that increase lateral support when you turn into corners.

In terms of storage, you get a space behind the seats, two cup holders under the centre armrest and large door pockets. Meanwhile, the boot has a 281-litre capacity (roof up or down) and has a hatch that lets you poke longer items through into the passenger compartment.

The BMW Z4 is available with a long list of options that make it an easier car to live with every day.

Autonomous driving aids feature highly and include things like active cruise control that can operate the car’s brake and accelerator at speed and on tailbacks of motorway traffic. You can also have blind-spot warning and self-park systems, the latter can park in and out of spaces and can reverse the car up to 50m back up the road to a space you’ve just driven past – all you need to do is operate the accelerator and brake.

All Z4’s come with LED headlights, but you can go one step further to the optional Adaptive LED headlights. They’re controlled by a camera at the top of the Z4’s windscreen, it can detect other cars and turn off individual LEDs in the headlights – casting a dark spot on the other car while continuing to illuminate the road around it.

To that, you can add options such as two-zone climate control, which lets you and your passenger have different temperature settings and ambient lighting that lights the interior in your choice of selectable LEDs. You also get three stereo options – the basic system, a mid-range model with ten speakers and a 205W output and a Harman Kardon system with 12 speakers and a 464W output.

To read a full review of the BMW Z4 when we have it, bookmark this page or sign up to the newsletter at the top of your screen.