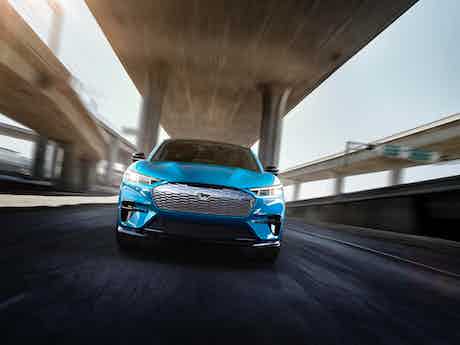 This is the Mustang Mach-E – Ford’s all-new electric SUV that’s also a Mustang. And here is everything you need to know about it.

The Mustang Mach-E is what happens if you cross a normal Mustang coupe, an electric car, and an SUV. So you get Mustang bits like the long bonnet and muscular haunches, EV bits like the blanked-off grille, and an upright SUV-style body. The all-new electric car is an alternative to SUV EVs such as the Tesla Model X, Mercedes EQC and Audi e-tron. It is expected to go on sale at the end of 2020 with a starting price of around £40,000. That’ll be for an entry-level model with a 75kWh battery and two-wheel drive. A top-of-the-range model with four-wheel drive and a 99kWh battery could cost almost double that.

The Mustang Mach-E line-up is a choice between price, range, and performance. If you want the cheapest option, go for a rear-wheel-drive car fitted with the 76kWh battery. For the longest range, you can go for a rear-drive 99kWh model, which is good for up to 370 miles between charges. And if you want to focus on performance, go for the 99kWh car but with four-wheel drive and twin motors, which will get from 0-60 in about 5.5 seconds.

If you want true Mustang-style performance, then you’ll have to wait until spring 2021 for the Mach-E GT. It’s expected to make around 465hp and 830Nm from its twin electric motors. And with four-wheel drive that should mean it’ll go from 0-60 in less than four seconds. The range will suffer in the GT, though – it’s unlikely to get further than 300 miles on a charge.

The Ford Connected Wallbox will charge the Mach-E at a rate of 38 miles for every hour of charge. Alternatively, a standard three-pin plug on a domestic outlet will give you about 9 miles of range per charging hour. Away from home, you should get 80 percent battery charge in about 40 minutes if you can find a fast DC charger. But that’s less than brilliant when a Tesla Model 3 will do the same in under 30 minutes via a Supercharger station.

You can unlock the Mach-E using the car’s key, or via Bluetooth on your smartphone. But, unlike pretty much any other car, there are no traditional door handles. Instead, you press a button hidden in the side of the car. This opens the door ever so slightly, and you then pull it the rest of the way by jamming your fingers into the crack. But what if you’ve lost your key and have run out of phone battery? Well don’t worry, you can still open the car by tapping out a combination into a keypad set into the door itself. Very James Bond.

Dominating the Mach-E’s cabin is a huge 16-inch infotainment screen – it’s even bigger than the one in the Tesla Model 3. It also lets you open multiple screen windows at once so, just like with an Android smartphone, you can scroll through your music library, but still keep a small window open in the background for your sat-nav directions. Other clever features include a range predictor that takes account of variables like weather, road gradients and traffic to give you an accurate range calculation for your journey.

The Mustang Mach-E comes with a full suite of autonomous driving aids as standard. As a result, it can accelerate, brake and steer for you on the motorway. It can also apply the brakes if you try to reverse out into oncoming traffic. Plus, if it senses an imminent forward collision and there’s no time to stop, its Evasive Steering Assist can guide you around the potential accident. All-wheel-drive versions of the Mustang Mach-E get an electric motor at each axle. This can send power to whichever wheel has the most grip much quicker than a conventional mechanical four-wheel-drive system. Ford says it’s tuned it to provide maximum traction in corners but has also vigorously tested the Mach-E on wet and snow-covered roads. The Mach-E is also the first car to be tuned using Ford’s racing simulator in North Carolina.

The Mach-E might have nicked some styling cues from the Mustang muscle car, but really it’s a spacious SUV. Ford claims it will have room for five adults, plus there should be plenty of interior storage for smaller items. The Mach-E also gets two boots – a 402-litre one at the back and a 100-litre frunk in the nose where a petrol or diesel engine would normally go.