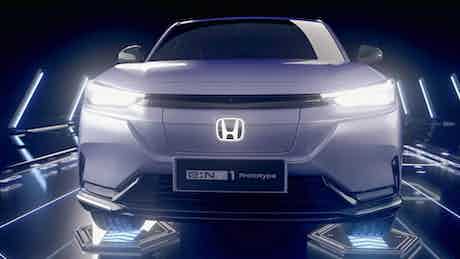 Honda will launch an all-new small electric SUV in 2023, and teased that car’s design with a new concept called the ‘e:Ny1’. Check it out here…

Honda will sell a new small SUV in 2023 that’s shaping up to be an electric version of the recently released HR-V.

It’ll be an alternative to the likes of the Volkswagen ID4 and the Hyundai Ioniq 5, and will take inspiration from the e:Ny1 concept, shown below.

The biggest change for the new e:Ny1 is the blanked-off front grille. After all, it’s an electric car so doesn’t need to suck in plenty of cold air to help cool a hot petrol engine.

See the best EVs on sale

From the side, both cars look pretty much identical with a sloping roofline and a rear door handle neatly hidden behind the back window.

Things are just as similar at the back, with both cars coming with a full-width brake light and a black roof spoiler.

The new e:Ny1 (shown above) drops the conventional honda badge in favour of some fancy chrome script on the bootlid, however.

Honda hasn’t revealed any info about the new car’s interior, but you can expect it to look almost identical to the HR-V‘s cabin (shown above).

There’ll likely be a raised central touchscreen (just like in the new Civic) along with a digital driver’s display and a minimalist dashboard design with only a few buttons and knobs for the climate control.

No details have been confirmed about the new model’s battery or motor specs, but you can expect it to improve on the Honda e’s modest electric range.

That dinky electric city car can only manage a claimed 136 miles on a full charge thanks to its small 35kWh battery. The new electric HR-V could come with a battery of between 50-80kWh to help it face-off against the likes of the Hyundai Ioniq 5 (with 58kWh and 78kWh battery options) and the 77kWh Volkswagen ID4.

This should give the new Honda at least 200 miles of range.

Honda hasn’t confirmed any specs for the new e:Ny1-based electric Honda HR-V, but it’s possible it could use the 154hp electric motor from the top-spec Honda e Advance.

Honda has confirmed that a new small electric SUV based on the e:Ny1 concept will go on sale in 2023. If it is indeed a fully electric version of the new HR-V, you can expect it to cost significantly more than that car.

Depending on the finished EV’s battery capacity and specs, there’s a chance the cheapest versions could just sneak in at under £32,000, meaning they’d be eligible for the government’s plug-in car grant.

If you can’t wait for this new car to go on sale, check out the latest electric car deals or see how easy it is to sell your car through carwow.