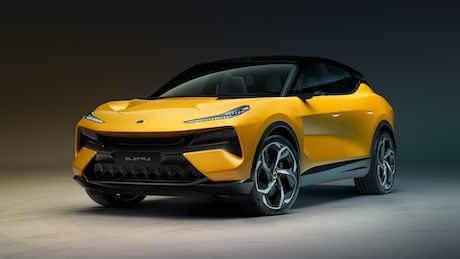 The Lotus Eletre has been revealed as the brand’s first-ever SUV. This all-new electric car is packed with performance-focused tech and advanced self-driving features that make it one of the most futuristic SUVs ever made. Read on for more…

This is the Lotus Eletre – it’s the first-ever SUV from the British sports-car brand and its second EV after the Evija hypercar.

The new Lotus Eletre isn’t a jacked-up sports car, and it isn’t a boxy high-riding off-roader either. It has a sloping coupe-like roofline and heavily sculpted doors, but these are all supported by giant alloy wheels (up to 23-inches) that can only belong to a sporty SUV.

Aggressive-looking SUVs aren’t a new thing, but the Lotus Eletre’s scowling headlights, ultra-sharp bumper creases and futuristic air vents should be enough to give the slack-jawed Lamborghini Urus a few sleepless nights…

Lotus says the Eletre has been designed to let air flow through bits of its bodywork to reduce drag – just like on the Evija hypercar.

Ok, so the Eletre doesn’t have any cavernous cutouts in its backside like that car, but it doesn’t take a trained aerodynamics engineer to spot the holes in the front bumper, bonnet and behind the side windows.

Other neat aerodynamic tricks include the hidden rear spoiler that unfolds at high speeds and the fin-like spoilers on the roof that are specifically designed not to obstruct the car’s onboard sensors. More on those later…

Lotus used to build some of the most stripped-out sports cars on sale. If the Eletre is anything to go by, those days are long gone. This new EV SUV looks suitably plush inside and comes packed with kit.

The raised centre console is supposed to make you feel cocooned like in a traditional sports car, but the massive 15.1-inch landscape touchscreen (that folds down when you switch it on) could have come straight out of a posh saloon.

There are two additional screens (one for the driver and another for the passenger) and an augmented-reality head-up display, like you can get in lots of new Mercedes models.

There’s an additional touchscreen display in the back between the rear seats, too.

The new Lotus Eletre comes with two electric motors (one driving the front wheels and another driving the rear wheels).

Together they produce 600hp – enough to sprint the Eletre from 0-60mph in less than 3 seconds. That makes it quicker than an Audi e-tron S, a BMW iX M60 and a Ford Mustang Mach-E GT, but not quite as face-distortingly rapid as a Tesla Model X Plaid.

Tesla fans shouldn’t be too smug – Lotus is planning to produce two additional versions of the Eletre with more power.

The Lotus Eletre has 348 miles of range thanks to its large (100kWh+) battery pack. That’s almost exactly the same range as you get from a BMW iX M60 and a Tesla Model X Plaid, and a whopping 117 miles more than an Audi e-tron S can manage.

The Eletre also has a beefy 800V electrical system (the same voltage as a Porsche Taycan) that lets you charge it using speedy 350kW public fast chargers. These can boost the Lotus’ batteries from 10-80% charged in less than 20 minutes.

The new Lotus Eletre comes with four driving modes: Range, Tour, Sport and (in a first for Lotus) Off-Road. These modes adjust the settings for the car’s motors, the steering and adjust the height of the standard air suspension to make it as comfortable as possible, just like in a Tesla Model X.

As you’d expect from a posh SUV, there are also plenty of optional extras. Carbon ceramic brakes that resist fade when driving on race tracks are available, along with rear-wheel steering to make the car more manoeuvrable in town.

Active anti-roll bars to stop the car from leaning in tight corners are also offered, along with an upgraded rear differential that can help send power to whichever rear wheel has the most grip.

Unusually, adaptive suspension that can adjust its stiffness depending on the driving mode (a common feature on many performance cars) is an optional extra.

Things you won’t see on other cars are the Lotus Eletre’s Lidar sensors (above). These form part of the car’s advanced driver-assistance system and allow the car to drive itself in certain ‘geo-fenced’ areas where local laws permit the driver to give the car’s systems full control.

Can’t wait for this new Lotus Eletre to go on sale? Check out the latest electric car deals available through carwow.

If you’re looking for an easy way to change your car, you can do just that through carwow, too. You can sell your car and get a great discount on a new one, all from the comfort of your sofa. Tap the button below to get started.