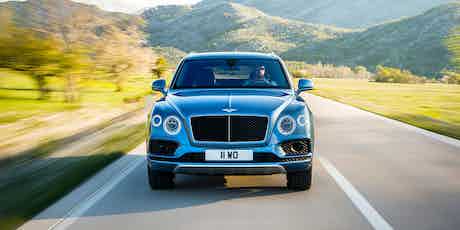 Bentley is rumoured to be working on a coupe version of its new Bentayga SUV, we have all the latest details…

Bentley initially resisted the temptation to create an SUV. However, the early success of its new Bentayga model and the plentiful stream of customers looking for an off-road luxury machine, mean the brand is now considering adding a coupe version to its lineup. Not much is known about this new model, but we’ve pulled together all we know about this rather unconventional Bentley.

Little has emerged about the what the new Bentley will look like, but it’s safe to say it’ll take significant inspiration from the standard version of the Bentayga. Early reports suggested the new model would take on a BMW X6-esque four-door coupe bodystyle, but recent evidence seems to suggest that the new model will be a two door SUV, akin to versions of the much smaller Range Rover Evoque. Either way, it’s also possible that elements of the firm’s Speed 6 concept to be integrated into the design.

It seems unlikely that any Bentayga-based model would differ significantly inside, but that’s no bad thing. The standard car has one of the best cabins of any production model, with an elegant design and the kind of high quality materials usually found in yachts and private planes. Of course, technology is high on the priority list as well, so there will be a slick infotainment system and Apple CarPlay support.

In terms of practicality, the Coupe will present more of a compromise than the standard car, but will still probably have more space than the Bentley Continental GT. A two-door layout would restrict access to the rear, but the SUV body’s generous dimensions should mean decent room for four – we suspect the optional middle seat in the rear might disappear to make room for a more spacious two-seat arrangement.

Again, it seems difficult to imagine that the Bentayga Coupe’s driving experience will vary significantly from the regular version. We expect the same surprisingly accurate handling, a pillow-soft ride and, of course, amazing refinement. Bentley might tune its new model to be slightly sportier than the regular model, but it’ll still be a luxury SUV coupe with a raised ride height.

Engine-wise, Bentley will offer the latest version of its W12 petrol engine – with 600hp and blistering performance as standard. A turbocharged V8 variant could follow, as could a plug-in hybrid version or even the V8 diesel Bentley will fit to the regular Bentayga. The latter two might even have something approaching reasonable running costs, although buyers will probably appreciate the greater range more.

Any Bentley is going to be an expensive car, and it seems likely the Bentayga Coupe will command some sort of premium over the regular version. That suggests an entry-level price of around £180,000 but, once you raid the options list, this figure could go much higher.

So little is known about this new model that it’s clearly some way off of production. There are several other new Bentley models in the pipeline, so we don’t expect to see the Bentayga Coupe before 2018 at the very earliest, by which time the standard car may be due a facelift and updates.