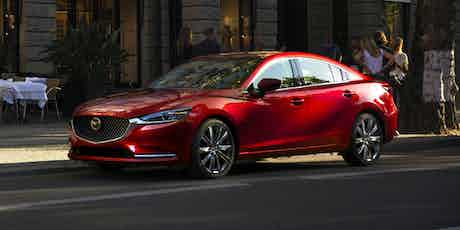 Mazda has revealed the facelifted Mazda 6 saloon. It’ll have a much better interior and improved engines

Mazda has revealed the upcoming facelift of the Mazda 6 saloon at the 2017 LA Motor Show. The styling has been tweaked and the interior has been revised to make it feel more premium.

Checking out the current Mazda 6? See how much you could save on our deals page. Click ‘login’ in the top-right-hand corner to sign in and configure a brand-new car, or browse our extensive selection of pre-reg, new, nearly new, ex-demo and used cars.

The Mazda 6’s styling hasn’t been changed too much because it’s just a facelift, but the alterations keep Mazda’s flagship looking smart and sharp. At the front the headlights have been tweaked and there are new chrome trim pieces, while the brake lights have also been updated at the rear of the car.

These pictures show the saloon version with a boot that opens below the rear windscreen, but UK cars will also be offered as an estate. The side profile is almost unchanged and will still have sharp creases that make the 6 stand out against more conservatively styled cars such as the VW Passat.

Changes to the Mazda 6’s interior are much more substantial. It’s been thoroughly upgraded with a redesigned centre console, new seats and softer materials on the dashboard and doors. At centre stage is an improved eight-inch infotainment system that leaves the dashboard delightfully free of buttons.

High-spec cars will come with a digital instrument cluster, in place of conventional dials, as well as the large info screen, and most models are expected to feature automatic emergency braking, adaptive cruise control and a suite of other driving aids. The facelifted 6 will focus on comfort, featuring ventilated seats and changes to reduce vibrations and noise intruding into the cabin.

UK cars will use improved versions of the current engine lineup, but the 2.0-litre Skyactiv petrol and 2.2-litre diesel are likely to be improved for better efficiency and performance.

Prices shouldn’t rise too much over the current car, so expect to pay £20,000 for an entry-level car. It’ll be in American showrooms by Spring 2018 and should be on sale in the UK not long afterwards.

Mazda will unveil the next version of Mazda 6 at the Los Angeles Motor Show at the start of December. There are only a couple of teaser pictures now, but the car looks smarter and the interior has changed.

Fancy a current Mazda 6? See how much you can save on our Mazda 6 deals page. Click ‘login’ in the top-right-hand corner to sign in and configure a brand-new car, or browse our extensive range of pre-reg, ex-demo and nearly-new cars.

The facelifted Mazda 6 will have a face that’s similar to the current Mazda 3 family car, with redesigned headights, a sportier grille and larger chrome trimmings. This is the US-spec car so expect the European version to come with some small changes, such as the inclusion of redesigned daytime running lights.

It’s unlikely that Mazda will change the overall shape of the 6 saloon too much – the current car does well for passenger space and has a large boot. Despite its age, the 6 still looks reasonably fresh, so only minor changes are needed. Still, Mazda exhibited the Vision Coupe concept at Tokyo Motor Show, which could drop some design hints about the facelift.

The Mazda 6’s interior is starting to show its age, because it doesn’t feel as well-made as cars such as the VW Passat or the Ford Mondeo and the design is less eye-catching than those in newer competitors. The teased photos show the new 6 will feature a completely redesigned centre console with fewer buttons and knobs than the outgoing car.

Most of the controls are likely to be migrated onto a new touchscreen infotainment system that looks thinner than the current screen. The dual-zone climate controls look more modern, although the US-spec car in this image doesn’t come with digital dials – they could be an optional extra on UK cars. In general, expect the interior to feel more upmarket, with more soft-touch materials and lots of leather.

The current Mazda 6 is one of the best saloons to drive, so expect the facelift version to carry on in the same vein. It’ll also offer a wider range of safety assistance, including an updated version of Mazda’s Radar Cruise Control – it can now come to a complete stop and pull away again at a set distance from the car in front without you touching the pedal.

The facelifted Mazda 6 will be shown at the LA Motor Show at the start of December and is expected to go on sale in mid-2018. Prices shouldn’t rise too much, so the entry-level car will start from around £20,000 and rise to almost £30,000 for the top-of-the-range model with an automatic gearbox.