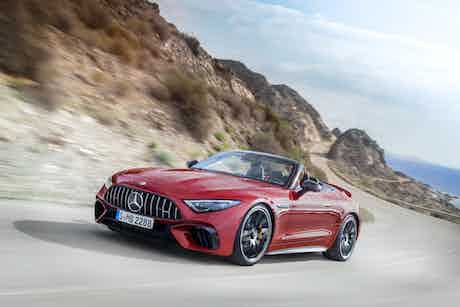 Mercedes has revealed the new AMG SL, the replacement for the AMG GT Roadster. Read on for all you need to know.

The covers have been lifted on the new Mercedes-AMG SL, with an all-new chassis and a selection of V8 engines.

This alternative to the BMW 8 Series convertible and Porsche 911 Cabriolet goes on sale in March 2022 and starts from around £100,000.

The new Mercedes-AMG SL has a very long, low and wide design that gives it real road presence, similar to the current AMG-GT Roadster.

Where the new SL differs however, is the aggressive front end treatment. The pointy headlights and wide grille make the car look like it really means business.

Around the back, there’s a rounded rear bumper with a diffuser and 4 square tail pipes. You also get some vents similar to the AMG-GT four door.

As standard, the new SL gets 19-inch alloy wheels, however they can be upgraded to some larger 21-inch rims.

The dominant feature inside the new Mercedes-AMG SL, is the two massive screens. The central infotainment display can pivot from 12 to 32 degrees to reduce glare, while the 12-inch drivers display has its own sun visor to aid visibility with the top down.

The standard sports seats come with built in neck warmers, so you can enjoy top-down motoring in all seasons and keep the chill at bay. They are also heavily bolstered, so they’ll hold you in place in the corners.

Unlike the old AMG-GT Roadster, the new SL has some rear seats. They are only suitable for children however, or maybe some golf clubs.

The overall design is rather flashy, with carbon fibre and shiny metal trims adorning the interior. Being a Mercedes, you know all the materials will feel lovely as well.

The new Mercedes AMG-SL range kicks off with a couple of 4.0-litre twin-turbo V8 petrol engines.

Mercedes is also planning a hybrid SL which could use parts from the AMG-GT four door E-Performance. It may even use that car’s 204hp electric motor to boost power in the SL to almost 790 hp.

The new AMG-SL has four wheel drive and a new lightweight chassis, so it should perform just as well in the corners as it will in a straight line.

That’s around £20,000 less than the cheapest AMG-GT Roadster you can buy now, but the more powerful SL63 will cost more.

Can’t wait for the new Mercedes-AMG SL to go on sale? Check out the latest deals on the best new convertibles at carwow.