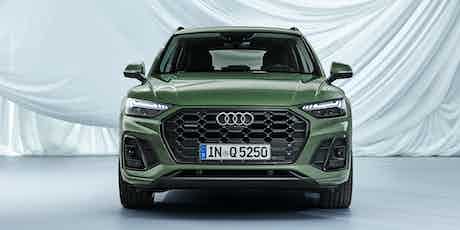 This is the new Audi Q5. It’s been given a range of updates to sharpen its looks, increase power and economy and improve its infotainment tech.

And here’s everything you need to know about it.

The Q5 exterior has been given a nip and tuck so that it follows the design of the latest Audi SUV – yes, we’re looking at you Q3 Sportback.

The most obvious change is to the grille. It’s now wider and flatter. The air intake underneath the grille looks meaner and the inlets under the headlights are taller.

The bumpers are bigger, which contributes to the Q5 length increasing by a whopping 19mm. And it comes in two new colours – Ultra Blue and District Green, which sounds a bit like a place where teenagers gather.

Meanwhile top-spec Vorsprung cars get new OLED rear lights. You get to choose from one of three rear light signatures when you order your Q5, each with its own animations that play when you unlock and lock the car. They also have a proximity sensor, so if a road user approaches your parked Q5 from behind, the OLED segments light up.

You’d need to be a real Audi geek to spot the changes on the inside. There’s a new 10-inch dashboard-mounted infotainment screen and the touchpad has been ditched (in favour of the aforementioned touchscreen) and been replaced by more storage.

As before, there are three trim grades: Sport, S Line, Vorsprung. At launch there will also be a bells-and-whistles spec called Edition 1. Audi says each trim now gets more equipment than before.

Sport
Upgrades over the current Sport model include LED headlights and rear lights as standard. You also get the MMI plus Navigation infotainment system, Audi ‘Virtual Cockpit’ digital dials and a reversing camera.

S line
S line cars now get matrix LED headlights with dynamic front and rear indicators. The grille gets a honeycomb design and new design S Line front and rear bumpers. It also comes with S line sport suspension and 19 inch alloys, rather than the 18s you get on Sport.

Vorsrung
These cars come with even bigger alloy wheels – 21 inches – and the OLED rear lights mentioned above. It gets adaptive rear suspension which should make the car more comfy over bumps, upgraded safety kit and a 360-degree camera to make parking less stressful.

Both cars come with a seven-speed automatic gearbox and four-wheel drive. An updated Q5 plug-in hybrid will come along later, along with a faster SQ5 in the autumn of 2020. The UK won’t offer the six-cylinder engines that’ll join the European range later.

The four-cylinder engines are assisted by a small electric motor that’s powered by a 12-volt mild-hybrid system. In theory this will give you a bit more power and a bit better fuel economy, though in the real world you may struggle to notice the difference. Car makers are introducing this kind of technology to bring down their average CO2 emissions to meet targets and avoid hefty fines.

The Q5 gets an upgrade to the infotainment system. You operate the new system either via the 10-inch touchscreen on the dashboard, by voice commands or using buttons on the steering wheel. The touchpad from the current model has been dropped. The software powering the system has been given an upgrade too. The new system is called MIB 3, which unfortunately has nothing to with Men in Black, but Modular Infotainment Platform. Regardless of what it’s called, it should make the system faster.

The infotainment screen is complemented by a 12-inch high-res digital drivers display behind the steering wheel. It comes with its own unique Q5 graphics and you can choose between three graphic layouts – up from two in the current car.

The range kicks off with the 40 TDI Sport which costs from £42,950 – around £800 more than the current version costs. That makes it a bit more expensive than an equivalent Mercedes GLC and Volvo XC60, but a bit cheaper than a Jaguar F-Pace.

The car goes on sale late July, with first deliveries expected for the numberplate change in September.

Audi has yet to confirm prices for its Vorsprung models so check out the table below the Q5 prices we do have.

If you don’t want to wait until then, check out the Audi Q5 deals on the current model – tap the button below.