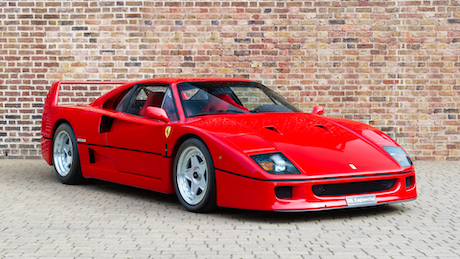 There are loads of great things that came out of the ’80s: shell suits, The Wall by Pink Floyd, and the A-Team to name a few. As for cars, there were some gems that debuted in the 1980s.

With this in mind, we’ve compiled a list with 15 of the best ’80s cars, including everything from hot-hatches to world-beating supercars.

Our pick of the greatest 1980s cars are:

The legendary Peugeot 205 GTi is widely considered to be one of the best hot hatchbacks of all time. When it launched in 1984, motoring journalists raved about its nimble handling and peppy engines.

The 205 GTi was originally only sold with a 1.6-litre petrol engine that produced 105hp. However, in 1986, a more powerful 1.9-litre unit was offered with 130hp. No matter which engine you choose, fun is guaranteed.

The Ford Capri was marketed as “the car you always promised yourself” when it was first launched in 1969, and no other nation welcomed its arrival quite like the UK. It was fast, fun, looked great and it wouldn’t break the bank.

In 1978 Ford unveiled the MKIII Capri, and in 1981 it released the Capri 2.8 Injection which featured a V6 engine from the Granada. You could have a 2.8 Injection Special if you wanted to show off with some five-spoke alloys and a Recaro interior. The 280 Brooklands edition marked the end of the Capri in 1986.

The Ferrari F40 is one of the most iconic cars of all time – let alone the 1980s. The mid-mounted twin-turbocharged 2.9-litre V8 launched Ferrari past the 200mph barrier and the limited production run of 1,315 means they’re becoming increasingly valuable.

This was a Ferrari that wasn’t pretending to be luxurious, and you could tell from the minute you step inside that it was built to go as fast as possible. This, combined with its very raw driving experience means that the F40 is most at home on the track.

The E30 BMW M3 kicked off the iconic range of sports saloons back in 1986. Built for the world of racing, it racked up numerous touring car championships titles. Meanwhile, out on the road, it was the yuppy super-saloon to beat.

The M3 got plenty of racy trinkets to make it stand out from the standard 3 Series including flared wheel arches and deeper front bumpers. You’ll just have to get used to the race-inspired ‘dog leg’ gearbox with first gear positioned where you’d normally find second.

“Fire up the Quattro” are probably four of the most iconic words in British television. Nothing sums up the 1980s quite like Ashes to Ashes’ Gene Hunt slithering around in a bright red Audi Quattro smashing through gratuitous stacks of cardboard boxes.

First and foremost though, the ‘Ur Quattro’ (‘Ur’ loosely translates as ‘the’ in German) was built to dominate the World Rally Championship. Its four-wheel-drive system was something never seen before, and as such, it claimed 23 WRC race wins.

It’s time to take a look at the Ferrari F40’s arch-nemesis — the Porsche 959. Built as a homologation special, the 959 was destined for group B rallying. It had hydraulically height-adjustable suspension and a crawler gear to get you out of sticky situations. Not what you’d expect in a 200mph Porsche supercar.

Sadly, Group B rallying had collapsed by the time the 959 came to market, leaving this four-wheel-drive supercar a bit of a lost cause. It did however race in the Paris to Dakar rally and the Le Mans 24-hour race.

The hot hatchback was a staple of the 1980s, and the Ford Fiesta XR2 was a great example. While it always lived in the shadow of the Peugeot 205 GTi, it was more than capable of holding its own on a twisty back road.

Its 1.6-litre Crossflow engine may only have 94hp, but it only weighs 840kg so it delivers plenty of smiles through the bends.

Every petrolhead loves an Alfa Romeo, and the GTV6 is a great example of the breed. This is mainly thanks to the iconic ‘Busso’ V6 engine, which had one of the best engine sounds ever.

Being an Alfa, it wasn’t without its problems. The rear-mounted gearbox wasn’t the easiest to use and it was plagued by reliability issues. All is forgiven though as soon as you bury your right foot in the carpet…

The 2.6-litre engine produced 276hp, or at least that’s what Nissan claimed. In the ‘80s and ‘90s, all Japanese carmakers came to an agreement that all performance cars would produce no more than 276hp, although many secretly produced a great deal more than this.

The Renault Alpine GTA was a rare beast when it came out in 1984, which is strange seeing as it was so popular with motoring journalists at the time. The mid-mounted V6 and exotic styling made it look like a supercar in miniature form.

The fibreglass body of the GTA meant the weight was kept down, which aided handling, while the Turbo version could do 0-60mph in just 7.0 seconds.

The Toyota MR2 breathed new life into the sports car market when it went on sale back in 1984. Built as a response to an increased demand for fuel-efficient cars, it proved that a car could be both fun and frugal.

The MR2 (Midship Runabout 2-seater) had a mid-mounted 1.6-litre engine that loved to rev. Combine this with a lightweight body and you have something that can easily match the hot hatchbacks of the day for fun.

It’s probably becoming clear that hot hatchbacks were very popular in the 1980s, and for good reason. They’re practical, good value and are huge fun to drive. We all remember the Volkswagen Golf GTI and the Peugeot 205 GTi, however, the Renault 5 GT Turbo was sort of forgotten.

It’s certainly still worthy of your attention though. The 1.4-litre turbocharged engine was pretty rapid for the day, with 110hp and a 0-60mph sprint time of 8.7 seconds. It weighed about as much as a tin of beans as well, making it perfect for flinging into corners.

Fast Fords have always gone down well in the UK. They’re blue-collar performance cars for the masses and the Sierra Cosworth is one of the most iconic. Built as a homologation under 1980s FIA rules for Touring Car and rally racing, it certainly packed a punch.

It had a 2.0-litre turbocharged engine with 204hp. Pair this with the huge whale-tail rear spoiler and you have a boy-racers dream car. Sadly, the Sierra Cosworth was also a thieves’ dream car thanks to its lacklustre security systems. As a result, insuring one became an expensive business.

The Lancia Delta was first launched as a fairly uninspiring hatchback in 1979 with a 1.3-litre engine. It evolved a few times throughout the 80s into a world-beating rally called the Delta Integrale.

Released in 1987, the Delta Integrale improved on the previous Delta HF 4WD to optimise it for rallying. It got big wheels to fit larger brakes, along with the iconic blistered wheel arches. It was further optimised throughout the years until the final Integrale Evoluzione 2 in 1993.

A slight curveball here, but the Talbot Sunbeam Lotus is a very special thing. Born out of Chrysler’s desire to take on the Ford Escort RS on the rally stage, Lotus were drafted in to take their hum-drum hatchback and inject some sporty flair into it.

The Sunbeam Lotus got a pokey 2.3-litre engine and a stiff, rear-wheel-drive chassis. Motoring journalists at the time raved about how well it drove, but this wasn’t enough to shift them from the showroom floor. It had a short run of just two years and only 2,308 were built.

Looking for a great deal on your next car? Head over to the carwow configurator to pick your ideal model and get it for a fair price from one of our trusted dealers. You can also sell your car through carwow. It’s quick and easy, plus you’ll get loads of great offers to choose from.