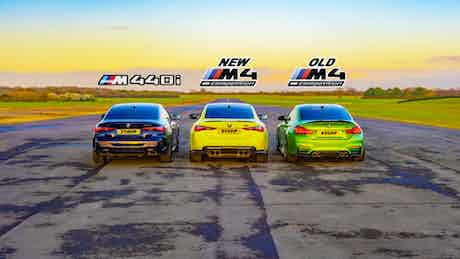 The latest BMW M4 burst onto the scene recently with a real bang. We’ll leave the styling for you to decide on, but there’s no arguing with the level of performance on offer and how exceptional it is to drive too.

With a 3.0-litre, twin-turbocharged straight-six engine under the bonnet, it sends a healthy 510hp and 650Nm of torque to the rear wheels through an 8-speed torque-converter automatic gearbox.

You will have to pay at least £76,055 for that performance though — and is it really worth that?

If you want something like the new M4 without the price, there are two options.

It does have a slight advantage, though. Power in the M440i is sent to all four wheels through the same 8-speed gearbox as the M4, so in theory, it should get off the line a bit faster. Not to mention it also costs about £20,000 less.

What if you don’t want to for the ‘almost an M4’, though? Well, dip into the used market and you can pick up an example of the outgoing BMW M4 Competition for about £40,000.

For half the price, you’re not getting half of the car compared to the new M4 either. Its older 3.0-litre twin-turbocharged straight-six engine may put out less power at 450hp and 550Nm of torque, but it’s sent through a slicker seven-speed dual-clutch automatic gearbox.

Crucially, it weighs much less too — tipping the scales at 1,590kg. Of course, you’ll have to do without the new car warranty and all that, but if sheer performance is all you’re after, it’s worth considering.

There’s only one way to decide whether or not you should stump up the cash for a new BMW M4 or go for the alternatives here, and that’s the carwow drag race.

We’re pitting all three against each other in a ¼ mile race, along with the usual rolling races and brake tests to see if the new kid on the block is all it’s cracked out to be. Watch on to find out…

Rapid performance coupe with outlandish styling
9/10
£76,990 - £96,235
RRP
Read review Compare offers
Like this article? Share it with others!