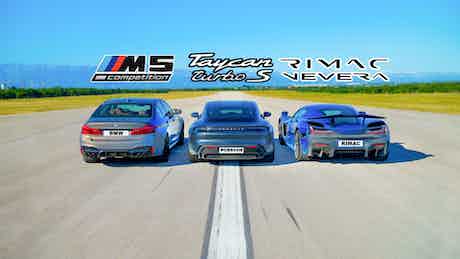 How much is too much? Happily, in this ever-evolving world that’s inexorably turning to electric power, it appears that no power output is too much – at least if your company’s name is Rimac.

You see, Rimac is rapidly becoming synonymous with incredible power outputs and performance, and is doing to the world of performance hypercars what Tesla has done to sportscars. In short, annihilating them.

The latest creation from Mad Professor Rimac is the Nevera, which has no fewer than four electric motors (one at each wheel), and so generates 1914hp. To give you some context, that’s a full four times the power output of a Ferrari F40, which don’t forget was the first supercar to crack 200mph.

Torque? Oh yes. It has some of that. Only the trifling matter of 2300Nm. The Dodge Challenger SRT Demon, thought to be the ‘king of the dragstrip’, produces less than half that. Weedy V8 and all that. Pah.

The Nevera has no fewer than four single-speed transmissions to deal with all the power.

However, Rimac isn’t the only brand making waves in the EV world. Porsche rocked the boat a couple of years back when it launched the Taycan, a fully electric four-door, four-seat saloon with the accelerative power to give you a facelift.

The Turbo S model (yes, yes, we know there’s isn’t an actual turbo inside, but Tesla does Superchargers so that’s okay) tops the range and features two electric motors and four-wheel drive.

A kerbweight of 2295kg means the Taycan Turbo S is no featherweight, however.

Still, the good news is that all the Porsche goodness comes for £138,830, less than a tenth of the price of the Rimac Nevera.

Only a few years ago, the thought of a twin-turbo V8 saloon car with 600hp would have been considered a bit loopy. But times they are a changin’, and the BMW M5 is actually the weediest of the trio we have here.

Well, we say weedy, but a 4.4-litre motor that generates 750Nm is definitely going to add a certain sparkle to your day. The BMW transfers all this power through an eight-speed automatic gearbox and a four-wheel-drive system, so it should definitely get off the line briskly. It will undoubtedly be helped in this regard by its sylphlike kerbweight of 1855kg.

The M5 is also the cheapest car here by some way, at £89,645, so it presumably represents great value. Well, it does in this company anyway.

So, where is your money going? Traditional V8 blood and thunder, or futuristic EVs with the ability to seemingly bend physics?