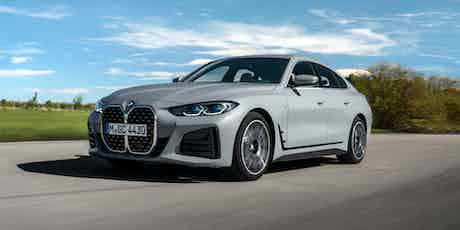 The new BMW 4-Series Gran Coupe has been revealed in petrol, diesel and sporty M440i xDrive flavours. Here’s everything you need to know…

This is the new BMW 4 Series Gran Coupe – the four-door version of BMW’s slinky 4 Series Coupe. This new model is an alternative to the likes of the Audi A5 Sportback and costs from £40,465. It’s on sale now, with the first UK deliveries expected in November 2021.

The BMW 4 Series Gran Coupe is a four-door version of the 4 Series Coupe. But, don’t go thinking it’s a 3 Series saloon with a different badge – this new car looks completely different.

Let’s start with the front – yes the new 4 Series Gran Coupe gets the same divisive bunny-toothed grille as the regular coupe. The bonnet and headlights are more-or-less identical, too.

M440i models (shown above) come with a few contrasting metal-effect bumper trims in the intakes below the headlights, similar (but not identical) to those on the standard M440i coupe.

Things look very different from the side, though. Where the normal 4 Series Coupe has a single door and a low-slung roof that curves down toward the bootlid, the Gran Coupe has an extra door, a longer body and a roof that meets the bootlid just above the brake lights.

It’s a far sportier affair than the comparatively boxy 3 Series, but doesn’t look quite as svelte as the smaller 4 Series coupe.

Further differences between the standard Coupe and this ‘Gran’ model (not a reference to anyone’s nan, in case you were wondering) include the hockey-stick-shaped trim on the doors – just like on the i4 electric car.

The new 4 Series Gran Coupe also has a bit of extra black plastic trim on the rear bumper that reaches out to meet the (fake) air vents behind the rear wheels. Thankfully, the exhaust pipes are real…

Just like its exterior, the new BMW 4 Series Gran Coupe shares a fair amount of its cabin with the 4 Series coupe and 3 Series saloon. You get an almost identical dashboard with lashings of leather, glossy plastic and metal-effect trim.

You also get the same dual-screen infotainment system, so there’s a 10.25-inch touchscreen and a 12.3-inch digital driver’s display.

This comes with the same standard sat-nav and smartphone mirroring features as the systems in the BMW 3 Series and 4 Series coupe, and you can expect it to be just as easy to use.

This 4 Series Gran Coupe’s iDrive system also comes with Amazon Alexa built-in, so it should understand a much wider range of voice commands than the already-impressive ‘Hey BMW’ feature.

In terms of practicality, you can expect the 4 Series Gran Coupe to offer similar back-seat legroom to the 3 Series saloon, but slightly less headroom as a result of its lower coupe-like roofline.

You can get the new BMW 4 Series Gran Coupe with a range of four engines at first. Entry-level 420i cars come with a 184hp 2.0-litre four-cylinder petrol engine and do 0-60mph in under 7.9 seconds.

Diesel and six-cylinder petrol models come with mild-hybrid tech to help reduce fuel consumption. This uses a small electric motor to recoup energy usually lost when you brake, and it uses this to give the engine a hand when you accelerate hard.

Check out the latest BMW deals available through carwow or compare the top 10 coupe cars on sale right now.