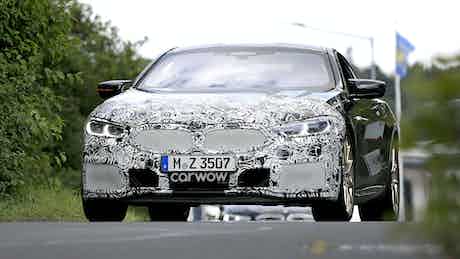 The facelifted BMW 8 Series has been spotted in Coupe and Gran Coupe guise before it goes on sale in early 2022. Read on for everything you need to know about this updated GT car.

The BMW 8 Series Coupe and Gran Coupe will soon get some visual upgrades to help it tempt you away from the likes of the Mercedes CLS, the Audi A7 Sportback and the Porsche Panamera.

The 8 Series has been on sale for a few years now, and BMW’s expected to give it some new looks, subtle interior upgrades and some new tech.

Judging by the fairly limited disguise on these test cars, the BMW 8 Series Coupe and Gran Coupe aren’t set to change a great deal as part of their mid-life refresh. The changes will mostly be limited to detail tweaks on the bumpers, bonnet and air intakes.

Even the front grille seems to have been carried over mostly unchanged from the current cars, so there’ll be no huge coffin-shaped intakes like you get in the new BMW 4 Series and upcoming 4 Series Gran Coupe.

These new cars look very similar to today’s BMW 8 Series coupe and Gran Coupe from behind, too. There’ll be a set of broad, slim brake lights, a pair of vertical air vents and some square exhaust tips.

Like the current 8 Series, the updated version will be available in an array of different body styles. These prototypes show you what the four-door Gran Coupe and two-door Coupe will look like, but there’ll also be a soft-top convertible version.

As with the design, the new BMW 8 Series will likely use a similar range of engines to the outgoing model. Expect the range to consist of a selection of six-cylinder petrol and diesel engines, along with a 4.4-litre twin-turbo V8 that’ll be offered in range-topping cars.

A reworked version of that same V8 will power the high-performance M8 models, too. Expect the new M8 Coupe and M8 Gran Coupe to be the quickest-accelerating and fastest BMWs you can buy.

There’s a chance the 8 Series’ six-cylinder engines could come fitted with a new mild-hybrid system to help them use less fuel and produce fewer emissions.

There’s also a (slim) chance the new 8 Series could be offered with the same plug-in hybrid system as the BMW 7 Series 745e with around 30 miles of electric range.

If the exterior is anything to go by, the BMW 8 Series’ interior likely won’t change that much as part of its mid-life facelift. Don’t be surprised if BMW spices things up a bit with a redesigned steering wheel and the option of some new interior trim pieces.

There’s a chance the revised 8 Series could come with BMW’s latest iDrive 8 system. This will be available in the iX SUV first and will feature an even smarter voice-activated personal assistant. It’ll also get over-the-air updates that’ll keep your car’s software up-to-date without you having to visit a dealership.

There’s no word just yet on a release date for the updated BMW 8 Series, though the car should arrive in showrooms by early 2022.

Because this is only a mid-life facelift, rather than an all-new model, the new 8 Series isn’t expected to cost much more than the current car. You can expect to pay from around £74,000 for a new four-door model, and slightly more for a two-door coupe. Convertibles will be pricier again, while range-topping M8 versions will set you back at least £120,000.

Can’t wait for this new car to appear in showrooms? Check out the latest BMW 8 Series deals available through carwow or compare the top 10 best coupe cars on sale now.