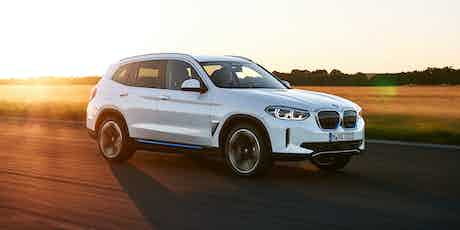 The new BMW iX3 is the German manufacturer’s first electric SUV and it’s available to pre-order now. Here’s everything you need to know.

For an extra £3000, the Premier Edition Pro gains a Harman Kardon stereo, a head-up display that displays important info in your eye line, a park-assist system that’ll automatically steer you into parking spaces, automatic headlights, adjustable lumbar support for the front seats to help prevent backache on long drives and a gesture-control feature for the infotainment system.

Both versions come with white, black, blue or grey body colours, with gloss black or brushed metal grey exterior trim. The range will be expanded with cheaper models in due course.

At a glance, you could easily mistake the BMW iX3 for any other version of the X3. Look more closely, though, and the differences become more obvious. The biggest hint is that blanked-off ‘kidney’ grille at the front – without a hot engine to cool, the iX3 doesn’t need the standard car’s open, slatted grille, so it has been sealed to help reduce drag and give the car’s range a small boost. A dimpled pattern breaks up what would otherwise be a big sheet of black plastic.

The 20-inch wheels are unique to the BMW iX3, too. Their heavily sculpted design helps to smooth airflow along the side of the car, improving range. Assorted blue highlights dotted around the iX3 – most obviously on the rear bumper where you’d normally spot some exhaust pipes – finish off the styling changes.

The BMW iX3 has a range of 285 miles – that’s according to the latest WLTP testing procedure. That’s a bit more than key alternatives such as the Audi e-tron and Mercedes-Benz EQC, but a bit less than the Jaguar i-Pace. The iX3’s range will be slightly lower than the claimed figure in normal driving conditions, however.

The iX3 should be compatible with almost every kind of charging station or power outlet, including super-fast 150kW chargers, which can give an 80% recharge in just 34 minutes. This means you can add 60-ish miles of range in about 10 minutes. There aren’t many 150kW chargers in the UK, but the network is growing.

See our map of the UK’s public charging points

All electric cars feature brake regeneration – a system that uses the electric motor as an extra brake that can feed energy back to the batteries that would otherwise be lost as the car slows down. This always happens when you press the brake pedal, but many of the latest electric cars can use this system to bring you to a stop when you lift off the accelerator pedal, too.

The BMW iX3 takes the system to the next level. Its regeneration system is linked to the satnav and driver assistance systems and adapts to the road situation. For instance, it’ll automatically slow the car down when you’re approaching a junction.

The system can be overridden by using the accelerator or brake pedal if you need to. Of course, you should never rely on such systems to operate the car for you.

The iX3’s electric motor produces 286hp and 400Nm of torque. Unlike most X3 models, the iX3 is rear-wheel-drive – a four-wheel-drive version isn’t available.

It’s not the fastest version of the X3, but it’s still pretty quick with a 0-60mph time of 6.8 seconds. Top speed is limited to 112mph. Which might seem a bit slow, but it helps to preserve range and it’s more than enough for UK drivers, anyway.

The iX3 will be no worse to drive than a standard X3 – in fact, it might be a bit better. That’s because the heavy batteries are fitted under the car’s floor, lowering the centre of gravity by a whopping 7.5cm. That will help disguise the iX3’s not-inconsiderable 2185kg weight by reducing how far it leans over in corners.

The standard adaptive suspension has a range of modes that alter how the iX3 feels to drive, ranging from soft and squidgy to firm and sporty. BMWs tend to be more fun to drive than their counterparts, and you can expect the same of this new iX3.

The silence of an electric car can be quite disconcerting if you’re not used to them. In a normal car, you can always hear the engine – an electric car doesn’t have an engine, so how do you know that you’ve turned it on? BMW has solved this problem by enlisting Oscar-winning composer Hans Zimmer (Gladiator, Inception) to write a tune that the iX3 plays when you press the stop/start button. Hopefully, it won’t become annoying…

All electric cars have to make an audible noise so that pedestrians and other vulnerable road users can hear them coming. The iX3 just uses one of BMW’s existing sound effects, but future electric BMWs will produce a symphony of Zimmer-composed sounds.

The iX3’s big, bulky electric motor sits between the rear wheels and eats into boot space. The iX3’s boot holds 510 litres of stuff, down from 550 litres in other X3 models. Fold the rear seats down and there’s 1560 litres of space, down from 1600 litres. That’s roomier than a Mercedes-Benz EQC’s boot but smaller than the Audi e-tron’s.

The BMW iX3’s infotainment system in the top-spec Premier Edition Pro model can be operated by gesture controls – a specific function needs a specific gesture. It can learn your habits too, automatically calling up a diversion route around traffic on your commute or tuning the radio into a news bulletin you always listen to.

It also gets ‘over-the-air’ updates (so you’ll never need to take it back to the dealership to get the latest software installed) and it’s compatible with Apple CarPlay and Android Auto.

Compare the latest electric cars deals and get all the info on the best electric SUVs on sale now.

Want to find out about the latest car news?