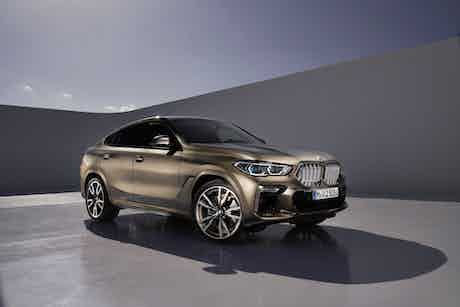 This is the new-look BMW X6. It’s got new styling and upgraded engine choices, so it will – says BMW – make it a genuine alternative to the Mercedes GLE Coupe and Porsche Cayenne Coupe. Read on for everything you need to know about the new coupe SUV…

The X6 is available to order now. The first owners will receive their cars this November.

As an SUV with coupe-inspired styling elements, the X6 gives you the classic, chunky proportions that you expect from an off-roader, but also a rakishly angled roof that echoes the sleek lines of a sports car. As is the trend in recent BMWs, the trademark ‘kidney’ grille is now enormous. It’s also available with illumination, to make it even more eye-catching.

Elsewhere, the X6’s LED headlights are reminiscent of the BMW X5’s; the air intakes – with more lights at their top – look rather like the ones on the smaller  BMW X3. The rear of the X6 looks like a combination of the BMW 8 Series and the X5, which has then been sat on by something exceedingly heavy.

The new X6 is 26mm longer and 15mm wider than the outgoing model, while the wheels start with a 19-inch diameter that can be expanded to 21 or 22 as you ascend the trim levels.

There are three different trims for the 2019 BMW X6: Sport, M Sport and M Performance. The entry-level Sport starts the range with 19-inch alloy wheels, adaptive dampers, ambient lighting, electric sports seats and the rotary dial-controlled iDrive infotainment system. As with every other new X6 model, the Sport also gets cruise control, parking assistance and forward collision warning as standard.

Another snazzy detail included across the board is the X6’s adaptive air suspension, designed to make the ride as comfortable and bump-absorbing as possible. Its height can be adjusted by up to 80mm at the touch of a button. This lets you choose between high ground clearance, for light off-roading, or low ground clearance, to make the car sportier (and easier to get into).

The M Sport edition makes the X6 feel… umm… sportier. It provides a new, noisier exhaust system, alongside improved brakes with blue-painted calipers. There’s an ‘aerodynamics package’, too, giving the X6 racier front and rear bumpers and side trims. A carbon fibre spoiler is available as an optional extra.

At the top of the range, the M Performance version adds stiffer Adaptive M suspension. Like the system fitted to regular models, it lets you adjust the chassis into three different setups depending on your needs. There’s also an M Sport differential, designed to make the car more agile in corners. Inside M Performance cars, you’ll find branded seatbelts and a premium Harman Kardon stereo.

The M50d is armed with a faintly ridiculous four turbochargers. It has 400hp, 760Nm of pulling power and can go from 0-62mph in 5.2 seconds. All the while, fuel economy can reach a claimed 40.9mpg.

At the top of the range is the M50i petrol unit. It’s the X6’s only V8, capable of reaching 62mph from a standstill in a blinding 4.3 seconds. That’s thanks to a gutsy 530hp and pulling power of 750Nm. However, the engine’s claimed fuel economy is a less-than-enviable figure of just 27.2mpg.

The good news is that the M50i is fitted with a lot of additional high-end fixtures as standard, including the M Sport differential and Adaptive M suspension. Configurable power steering is also chucked in.

No matter which engine you go for, the X6 comes with an eight-speed automatic Steptronic gearbox and a (rear-wheel-biased) four-wheel-drive system as standard.

The 2019 BMW X6 has a 580-litre boot. That’s 45 litres less than what you’d get in the Porsche Cayenne Coupe and seventy less than what the Mercedes GLE Coupe offers. On the other hand, the car’s wheelbase (the distance between the front and rear wheels) has been extended to 2,975mm: 60mm more than the GLE Coupe’s. This should mean more legroom for your backseat passengers.

BMW says that the X6 comes as standard with ‘2.5-zone’ automatic climate control (no, we have no idea what this means, either), which can be upgraded to four-zone as an optional extra. This would mean that every corner of the car gets its own ventilation controls. Other interior options include an Ambient Air package, which can dispense one of eight different fragrance choices into the cabin. There’s also an optional panoramic sunroof, which can have different, colourful patterns displayed onto it by the Sky Lounge system.

The BMW X6 has a 12.3-inch infotainment screen, operated by a rotary dial, steering wheel-mounted buttons, gesture controls and/or your voice commands. The infotainment is equipped with built-in satnav as standard, as well as an emergency call function that automatically alerts the emergency services if you have a nasty crash.

Annoyingly, the X6’s infotainment has Apple CarPlay functionality – but no Android Auto. Parking Assistant Plus is an optional extra, though, and includes a Drive Recorder feature. This, in the event of a crash, films the twenty seconds leading up to the impact, as well as the twenty seconds after, using the car’s 360-degree camera feature.