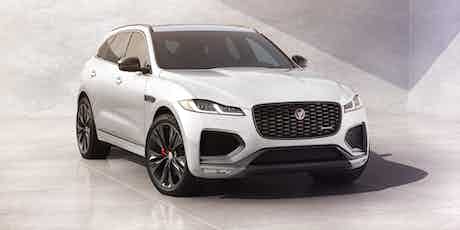 The Jaguar F-Pace gets a new R-Dynamic Black trim, bringing an upgraded spec to the SUV. Read on for full details.

The Jaguar F-Pace SUV is already a pretty handsome, good-to-drive premium car, so how can Jaguar make it more desirable to help it take on the likes of the Audi Q5 and Mercedes-Benz GLC? Simple — add more black.

Basically, the F-Pace R-Dynamic black carries over the recent exterior styling update for the F-Pace — new grille, slimmer lights, new bonnet, new rear lights, new boot and bumpers — and strips away all the exterior chrome. Instead, you get lashings and lashings of shiny black trim.

It’s on the door mirrors, the grille and grille surround, the side glass frames, the front wing vents, the rear ‘valance’ under the back bumper, and the badges.

Helping to set all of that off are massive 20-inch wheels, which instead of having a silly made-up name are simply called ‘Style 1067’ wheels. Rather cool, that. Peeping through the gloss-black spokes of those wheels are bright red brake callipers.

Up top, there are gloss black roof rails, which sit alongside the standard-fit panoramic glass roof. There’s a choice of eight paint colours, mostly metallic, and they include a new one for the F-Pace — Ostuni White.

There are no massive updates for the F-Pace’s interior — that all arrived last year with the major facelift, and included all-new digital instruments, a much-improved touchscreen (now running the impressive Pivi Pro software), and a new dash and centre console that look far more appropriately premium than the cabin of the old F-Pace.

The only changes for the R-Dynamic Black model are the addition of a satin-finished charcoal Ash wood veneer, and an interior mood lighting system that allows you to choose from 30 colours for the cabin lights.

The R-Dynamic Black model does introduce some new interior tech to the F-Pace, though. Most likely the one you’ll be most interested in is the addition of a wireless connection for Apple CarPlay and Android Auto so that you can safely and easily access your phone’s functions when on the move.

This software upgrade won’t be available immediately, but rather be delivered over-the-air, via the F-Pace’s built-in SIM card internet connection.

Jaguar hasn’t given a firm date for the arrival of this software upgrade but says that it will be rolled out to all F-Pace models with the new Pivi Pro system by the end of this year. The F-Pace can already have two phones connected at once via Bluetooth, and the wireless charging pad includes a phone signal booster.

There’s another interesting new tech idea for the F-Pace called the ‘Air Purge’ system. This can be switched on via the Jaguar Remote app in your smartphone once you set the desired departure time for your next journey. Basically, it switches on the climate control and the air recirculation fans for a few minutes before you leave so as to freshen up the air in the cabin — a nice idea, especially on a hot, stuffy day.

It’s a development of the Cabin Air Ionisation and PM2.5 filtration systems already introduced to the F-Pace, and there’s another potentially useful feature — a cabin carbon dioxide monitor.

As well as contributing to climate change on the outside, a build-up of CO2 inside a car can make a driver and their passengers feel woozy and sleepy, and the F-Pace’s system can detect when CO2 levels are getting too high, and start pumping in fresh air from the outside. To make sure that air really is fresh, there’s also a display that shows you the level of airborne particulates both outside and inside the car.

As well as the existing active steering assistance, and radar-guided cruise control, Jaguar is introducing another safety item to the F-Pace’s setup — tyres with built-in emergency sealant. This ‘self-sealing’ system can surround any sharp object that penetrates the tyre, and seals off any hole that develops, allowing you to continue your journey. The system is available on the F-Pace’s range of all-season tyres, and in 19-inch, 20-inch and 21-inch sizes.

The R-Dynamic Black model is available with pretty much any of the existing lineups of F-Pace engines. The headline act is the P400e plugin-hybrid, which boasts 404hp, 640Nm of torque, 0-60mph in just 5.0secs, yet has CO2 emissions of just 49g/km. The P400e’s battery can also fast-charge in just 30-minutes from a public DC rapid charger.

There are also mild-hybrid petrol and diesel models, including the 400hp 3.0-litre inline-six petrol P400, which uses both a conventional turbocharger and an electric supercharger; and a 250hp 2.0-litre turbo four-cylinder petrol. Diesel power comes from a 2.0-litre four-cylinder turbo with either 163hp or 204hp or a 300hp 3.0-litre inline-six with twin turbos. All of those engines have mild-hybrid assistance for improved fuel economy.

Or, you could go for the range-topping 550hp supercharged V8 SVR model, which now — to complement the R-Dynamic Black versions — can be had with an optional Black Pack option. This basically does to the SVR what the R-Dynamic Black does to the regular F-Pace. All of the exterior trim is turned to black (the regular SVR gets a gloss grey finish), and there are optional 22-inch ‘Style 5117’ forged wheels.

All models come with a standard eight-speed automatic gearbox with paddle-shift manual mode.

Check out the latest deals on the Jaguar F-Pace