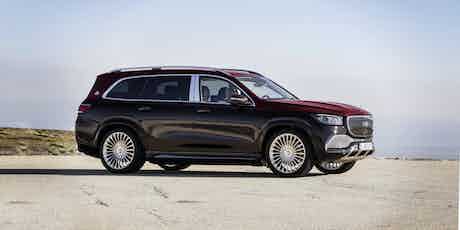 This is the new Mercedes-Maybach GLS 600 4Matic – and it’s as fancy as Mercedes SUVs get. Keep reading for all you need to know about this uber-luxurious flagship SUV.

Pricing for the Mercedes-Maybach GLS 600 4Matic has been announced almost a year after the car made its first public appearance. This is the first SUV from Mercedes’ Maybach luxury division and is an alternative to the likes of the Bentley Bentayga and the Rolls-Royce Cullinan.

The Maybach GLS is based on the normal Mercedes GLS but its exterior has been treated to some serious bling. The standard Mercedes grille with the three-pointed star has been ditched and replaced with a huge chrome grille with vertical slats. The lower plastic air intakes from the regular GLS have been swapped out for chrome surrounds with a mesh-style cover.

From the side view, the car looks fairly similar to the standard GLS, apart from the chrome Maybach badging and a new 22-inch chrome wheels. The Mercedes-Maybach GLS also has side skirts with a built-in running board that automatically swings out to help you step in and out gracefully. At the back, you’ll spot an additional chrome strip runs the full width of the car beneath the boot lid, along with some new exhaust surrounds and a chrome diffuser.

Two-tone paint finishes with pinstriping above the door handles are available in a range of colours, but these paint jobs cost as much as a cheap hatchback.

This flagship GLS has been given the Maybach treatment inside too. The rear seats, for example, are finished in quilted Nappa leather and sit 120 millimeters further back than in the Mercedes-Benz GLS to give you even more legroom. They also have calf supports and an exceptionally wide backrest that can be reclined up to 43.5°.

In the front, there’s plenty of high-gloss or open-pore wood, that’s supposed to remind you of vintage yachts (which you obviously own) and, unlike in the regular GLS, the Maybach’s air vents are made from solid metal.

The Maybach GLS gets the same infotainment system as the standard GLS, which isn’t quite as modern as the vast dual-screen system you get in the new Mercedes S-Class. It still looks great, though, and can be controlled using touchpads on the steering wheel, via the scroll wheel between the two front seats or by using the ‘Hey Mercedes’ voice activation system.

The Mercedes-Maybach GLS is powered by a twin-turbocharged 4.0-litre petrol V8 with mild-hybrid technology. It produces 558hp and 730Nm of torque, with an extra 22hp and 250Nm of torque available from the built-in electric motor. Power is sent to all four wheels through a nine-speed automatic gearbox. As a result, this SUV can propel itself from 0-60mph in an impressive 4.9 seconds. Top speed is limited to 155mph – that’s about as fast as you’d want to go in a mansion, after all.

The Maybach GLS comes with air suspension as standard, which will help make it comfortable on rough roads and stop it from leaning too much in tight corners. It’s a pretty common system on posh Mercedes these days, so to one-up the rest of the Mercedes range, the Maybach GLS comes with an optional ‘E-Active Body Control’ system. This scans the road ahead using a camera and individually adjusts each wheel’s suspension to help it better absorb incoming bumps.

It can also lean the GLS a few degrees into bends to make it feel more stable, and can even rock the car back and forth to try and get you out of sticky situations when you’re off-road. Not that you’ll ever venture off-road in your uber-luxurious Maybach…