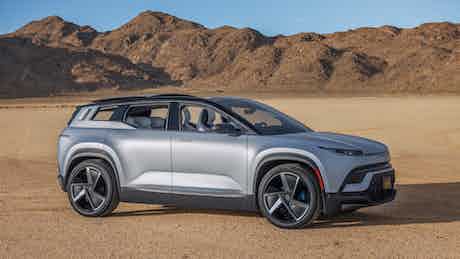 The new Fisker Ocean electric SUV has been revealed and it goes on sale in Europe in 2022. Read on for all you need to know.

The new Fisker Ocean SUV is going on sale in Europe later on in 2022. It will be available in the US and selected European countries from November.

Check out the best electric SUVs on sale

This alternative to the Audi Q4 e-tron and BMW iX3 is the first car Fisker will sell in Europe. It’s expected to arrive in the UK in 2023 and is set to cost from £34,900.

The overall design is very angular, with a lot of complex shapes and angular details. At the front, the thin LED headlights are connected by a full-width light bar, similar to what you get on a Volkswagen ID3 and ID4.

The side is dominated by the huge flared wheel arches, which are filled by 20-inch alloy wheels (although you can pay extra for massive 22-inch wheels if you fancy).

The rearmost windows are thinner than the ones above the car’s doors, to make it look more like a sporty hatchback and less like a boxy SUV.

At the back, the stand-out feature is the razor-thin LED lights that wrap around the side of the car. You also get a rear window that rolls down to help cool the car’s cabin, or to let you carry really long luggage (such as surfboards, shown above.)

It’s clear that Fisker has taken a leaf out of Tesla’s book when it comes to interior design. The Ocean doesn’t feature many buttons in the cabin.

That said, you do get some physical controls for the climate control below the huge 17-inch touchscreen. Speaking of the screen, it can swivel from portrait to landscape when you’re parked so you can enjoy a film while you wait for it to charge.

Looking elsewhere, the Ocean will comfortably seat 5, and the interior is fully vegan-friendly. Some of the materials used are made from recycled fishing nets and used T-Shirts.

The Fisker Ocean will be available with two battery options. The entry-level Ocean has 350-miles of range and there’s a ‘Hyper Range’ version that can travel up to 390 miles on a single charger. Fisker claims they are still testing the charging speeds, so these haven’t been announced yet.

Power outputs vary from 275hp in the entry-level car, all the way up to 550hp in the mid- and top-spec models.

The new Fisker ocean is due to go into production from November 2022, and Fisker claims it will go on sale in the US and selected European and Scandinavian countries soon after. While it is set to come to the UK, Fisker hasn’t announced exactly when this will be.

Prices for the UK have been announced though. Three trim levels will be available from launch, starting with Sport at £34,900. Next up is Ultra, which will set you back £48,900. Finally, Extreme models will cost £59,900.

Can’t wait for the new Fisker Ocean? Check out the latest deals on the BMW iX3, or compare the top electric cars on carwow.