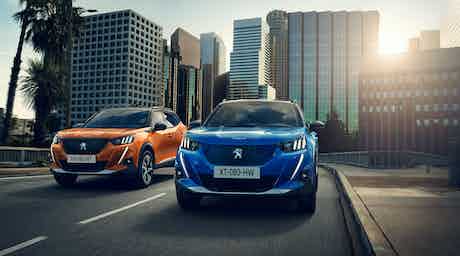 The new Peugeot 2008 gets striking styling and is available as an electric-only model. Keep reading for everything you’ll need to know.

This is the all-new Peugeot 2008 – the second generation of Peugeot’s stylish small SUV.

Along with striking looks on the outside, it gets the latest version of Peugeot’s i-Cockpit dashboard design, which is dominated by a pair of large infotainment screens. You can also choose from petrol, diesel and – for the first time – electric power.

Whether your 2008 is electric, petrol or diesel powered, you’ll get a small SUV with striking styling. Up front, the 2008 gets Peugeot’s ‘lion’s claw’ LED streaks down its headlights along with the talon-style strip lights that run down the edges of the front bumper.

Around the sides, the 2008 has creases and angles, while at the back, you get triple-slash taillights – the black bodywork in between giving the new car a family resemblance to the larger 3008 SUV.

As with the 3008, you’ll be able to specify your 2008 in sporty GT Line and GT trims, which come with 18-inch alloy wheels and LED rear lights. Meanwhile, the choice of colours you can choose from includes a new shade from Peugeot, named Fusion Orange.

The e-2008 electric model, meanwhile, can be distinguished by its body-coloured chequered grille, a sparkling Peugeot badge and a light dusting of ‘e’ badges on the back and sides of the car.

Inside, the 2008 gets the latest version of Peugeot’s i-Cockpit, which basically means you get an extra-small steering wheel with a digital instrument binnacle sitting above it, so you look over the wheel rather than through it to see the display.

Move to the centre of the car and, on top-of-the-range versions, you’ll find a ten-inch touchscreen that has TomTom sat-nav and is compatible with Apple CarPlay and Android Auto. Both allow you to use your smartphone’s apps on the car’s big screens.

Want to make your 2008 feel sportier on the inside? Then, as with the outside, you’ll want a GT Line or GT model, which get sports seats, aluminium pedals, black upholstery and mood lighting as standard.

Electric e-2008 models are distinguishable by their unique infotainment screen animations that tell you exactly what the electrics are getting up to. EVs in GT trim get their own ‘exclusive’ Alcantara upholstery.

Across the 2008 range, you’ll be able to specify options including a 10-speaker Focal stereo and head-up display that projects information like speed and range onto the car’s windscreen. Meaning you don’t have to take your eyes off the road when driving.

While Peugeot doesn’t mention interior practicality, the new 2008 is longer than the old model so you can expect it to have more rear-seat space, with room for four adults inside. Peugeot also tells us the electric model’s battery is stored neatly under the floor, having no effect on passenger space.

All models get a 360-litre boot that is, on paper at least, 20 litres smaller than the old model’s – although its sliding back seat can skew these figures.

In terms of engines, the headline news is, ironically, that you can have it without an engine at all – the e-2008 being a pure electric version.

It has a 100kW motor, which produces the equivalent of 136hp – about the same as the 2008’s mid-range PureTech petrol engine. While it won’t travel as far as the petrol car, the e-2008’s 193-mile range is 30 miles further than an electric alternative such as the BMW i3 can manage.

To help you eke out every last one of those miles, the e-2008 has a special B (for brake) driving mode for its regenerative brakes. With it selected, the Peugeot will gently slow down the minute you lift your foot off the accelerator. That recharges the car’s battery, but also means you can drive the Peugeot using one pedal – much like the e-Pedal system in the Nissan Leaf electric car.

When you do have to charge the car, you can do it using a variety of methods – the quickest being by a 100kW charger, which can replenish an empty battery to 80% full in just 30 minutes. You’ll be able to get a full recharge in about eight hours using the kind of 7.4kW wall-mounted box you can have fitted at home.

If all that sounds workable, Peugeot will include a few other features to ease your transition to electric power. Much of these centre around the MyPeugeot App which allows you to operate the car remotely. Using it, you can set the car to charge during cheaper, off-peak hours; check its range and set the air-conditioning so the cabin’s at the perfect temperature when you get in.

To go with the app, Peugeot will also offer you a number of services – including giving you access to a conventionally powered car for longer journeys and guaranteeing the battery’s future charge capacity.

Decide against electric and the Peugeot 2008 is available with a choice of three petrol engines and one diesel engine. All get a six-speed manual, aside from the mid-range petrol, which gets an eight-speed automatic.

The petrols are all 1.2-litre PureTech units with 100, 130 or 150hp. Peugeot’s yet to confirm any fuel economy figures, but you can expect them to be able to return around 45mpg. The diesel, meanwhile – a 100hp 1.5-litre four-cylinder – should be capable of around 60mpg.

While that sounds similar to what’s come before, the new 2008 gets a range of autonomous driving aids that weren’t available on the old model. They include lane keep assist – that can gently steer the car in lane – and active cruise control, which can brake and accelerate the Peugeot autonomously. On top of those, you can also get auto park and auto dipping headlights.

But will the Peugeot’s smart styling and EV motor make it an automatic success? Find out by bookmarking this page to read a full review in the coming months.