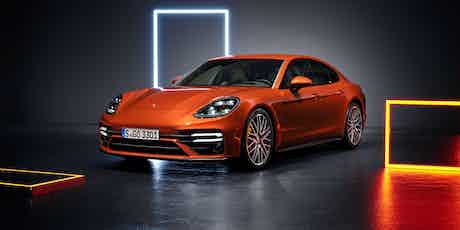 The Porsche Panamera and Panamera Sport Turismo range has been updated with some all-new models, including a range of hybrids. Read on for more details.

Porsche has refreshed the Panamera range with increased performance and a sprinkling of extra tech to help it keep pace with the likes of the new Audi RS7 Sportback, Mercedes-AMG GT63 S and Bentley Continental Flying Spur.

Porsche hasn’t made any drastic changes to the way the new Panamera looks. It’s tweaked the front bumper, so you now get different daytime-running lights across the range, and Turbo S cars get a new body-coloured strip that runs underneath the number plate.

At the back, the changes are just as discrete. There’s a new full-width brake light – to match the new Porsche 911 and Cayenne – and the diffuser between the four exhaust pipes now has slightly different vertical vanes, but that’s your lot.

As before, you’ll also be able to get the Panamera as a more practical Sport Turismo – essentially a fancy name for a stylish estate. You get more headroom in the back than in the Panamera, and the Sport Turismo’s useful 520-litre boot is still 20 litres larger than in the standard car.

Porsche has been busier with the spanners than it has with the pens and pencils because the new Panamera comes with an overhauled range of engines. For starters, there’s a new 4 E-Hybrid model that uses a 330hp 2.9-litre twin-turbo V6 engine and a 136hp electric motor to produce a total of 462hp.

This new 4S E-Hybrid can also drive for up to 34 miles using just electric power, which is 30% more than the old car could manage. It’ll also sprint from 0-60 in less than 3.7 seconds.

Porsche claims it’ll return up to 128.4mpg, although you can probably take that figure with a pinch of salt. The previous Panamera Turbo S E-Hybrid was supposed to return almost 75mpg, but it returned less than 40mpg when we drove it.

You’ll also be able to get the new Panamera in Turbo S guise. This version uses the same 4.0-litre twin-turbo V8 as the previous Turbo S E-Hybrid, but bumps power up to 630hp – 80hp more than you got in the outgoing Turbo.

This new Turbo S will do 0-60 in less than 3.1 seconds and has recently broken the executive car lap record around the famous Nurburgring race circuit in Germany with a time of 7 minutes and 29.8 seconds.

The range-topping Porsche Panamera Turbo S E-Hybrid has also been given a going-over. Now, its 4.0-litre twin-turbo V8 produces 571hp instead of 550hp which, combined with a 136hp electric motor, means it’s pumping out a whopping 700hp and 870Nm of torque. Now it’s quicker than ever – it’ll sprint from 0-60mph in 3.2 seconds, which is 0.2 seconds faster than before.

Porsche hasn’t just given the new Panamera more power – it’s also been tweaking the suspension to make it better to drive. The adaptive suspension has been tuned to make the car more comfortable and Porsche’s revised the active-roll stabilisation system to make it even better at preventing the car from leaning in tight corners.

As before, every Panamera comes with an eight-speed PDK automatic gearbox, but now you get lane-keeping assistance and road-sign recognition as standard. Adaptive cruise control still costs extra, which is a bit mean for a car that costs more than £70,000.

Porsche has kept the outgoing Panamera’s stylish interior for the new car. You get the same simple horizontal dashboard design with widescreen infotainment display and the broad centre console with gloss-black touch-sensitive buttons hasn’t been messed with, either.

Porsche hasn’t fitted the new car with the same dinky gear-selector as the new 911, but it has added wireless Apple CarPlay smartphone mirroring. Sorry Android users, you’ll have to stick to make-do with a plain-old Bluetooth connection.

The new Porsche Panamera and Panamera Sport Turismo are on sale now. Check out the table below for a full rundown of prices across the Panamera range.

Read our in-depth Porsche Panamera review or check out the latest deals on our pick of the best sports cars with four seats on sale now.