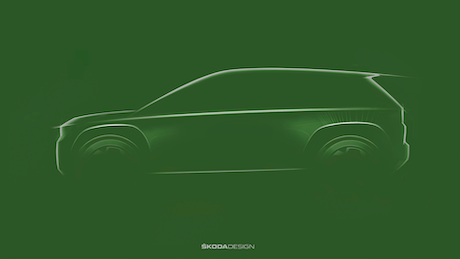 Skoda plans to launch a new electric city car in 2025 that could be called the Elroq. It’ll share parts with new cars coming from Volkswagen and Cupra and should cost comfortably less than £30,000. Read on for more…

Skoda has released a teaser image showing its new small electric city car. This new dinky EV will sit below the practical Enyaqi iV in the brand’s expanding electric lineup and could be called the ‘Elroq’.

This new Skoda will replace the off-sale Skoda Citigo iV electric car and is set to share parts with a pair of equally city-friendly EVs from VW and Cupra when it goes on sale in around 2025 as an alternative to the Fiat 500 and the MINI Electric.

The official Skoda sketch (above) doesn’t exactly tell you a great deal about the new car, but its boxy, upright design points to the new car being a small crossover SUV rather than a conventional hatchback.

In this sense, the new Elroq (if that’s the name Skoda runs with) won’t be a direct replacement for the Citigo iV. It should still be smaller than the smallest Skoda SUV you can buy today – the Kamiq. Check out Mat’s review of that car below…

The sketch’s bluff front end and straight crease under the windows also look similar to an earlier image Skoda shared of a future concept car (below.) Even the alloy wheels (or what you can see of them, at least) appear to match.

Although you can’t see much through the digitally frosted CGI glass, the car in this picture appears to have a similar silhouette to the new teaser image, and looks set to look very different from any Skoda on sale today.

Volkswagen and Cupra are both planning to release similar cars to the new Elroq (or whatever it ends up being called) in the coming years.

Teaser images of the Volkswagen (below) appear to show it’ll look more like a conventional hatchback than a boxy crossover.

It’s a similar story with the new Cupra. That sports a much slinkier silhouette than the Skoda.

As a result, you can expect the new Skoda to be a smidge more practical than these two cars.

All three cars are set to come with all-new interior infotainment tech, however. This could take an ultra-minimalist approach, as shown by the recent VW ID Life concept (above.)

The cheapest electric car Skoda currently sells is the Enyaq SUV, which comes with a claimed 256 miles of range in entry-level guise with a 62kWh battery.

The new city car will come with a smaller battery to help reduce weight and increase space in the cabin. It’s likely it’ll use new technology Volkswagen is developing called a ‘Unified Cell’ that could help reduce the battery cost by up to 50% in mass-market cars.

These batteries will appear in road cars from 2023 and they should become commonplace in cars built by VW (and Skoda – both companies are part of the same umbrella group) by 2030.

It’s possible this new battery tech will give the Skoda Elroq a greater range than today’s entry-level VW ID3. That car can travel a claimed 217 miles on a single charge.

Skoda hasn’t confirmed what this new car will be called but a tweet from the official Volkswagen Group account (below) says production of this trio of electric city cars is set to start in 2025.

Sneak peek!🤩These are the first sketches of our smaller e-models from #Skoda, #Cupra & #VW, which will be built in #Spain from 2025. These entry level electric vehicles make the access to #eMobility easier & push the country’s future of mobility – for generations to come. pic.twitter.com/LX49mJPYB5

When it goes on sale, the Elroq looks set to be the cheapest new electric car Skoda will make. This means it’ll be significantly cheaper than the £35,000 Enyaq, and will likely set you back less than £30,000.