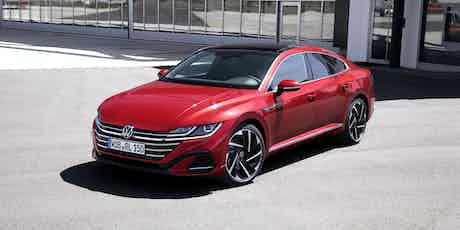 Prices and specs for the new 2021 Volkswagen Arteon have been revealed. Read on for full details on this Audi A5 Sportback and BMW 4 Series Gran Coupe alternative.

Watch our top-10 video for everything you need to know about the new 2021 VW Arteon and the all-new Arteon Shooting Brake.

The new VW Arteon is on sale now, priced from £35,435 – that’s for a hatchback model with a 150hp 2.0-litre diesel model and a seven-speed automatic gearbox. There’s also a 190hp 2.0-litre petrol model with the same gearbox that costs from £36,510 for the hatchback form and £37,640 for the Shooting Brake. VW will soon expand the Arteon range to include a cheaper entry-level petrol model with a manual gearbox, a plug-in hybrid version and a high-performance Arteon R model.

You can currently get the new VW Arteon in three trim levels:

The old Arteon was a pretty handsome looking car, so Volkswagen hasn’t changed much for this new model at all. The biggest difference is a new strip of daytime running lights on the grille that stretch from one headlight to the other. It makes the Arteon look a bit like Robocop’s helmet.

The brake lights have been tweaked and R-Line models get a set of four chrome exhaust tips instead of two. Although, these are almost certainly fake, just like on the old car. The rest of the Arteon looks pretty much the same as the previous model. So it’s a bit sportier than a Volkswagen Passat, but not quite as aggressive as an Audi A5 Sportback.

There is a proper hot version called the Volkswagen Arteon R. It has similar mechanical bits to the forthcoming Golf R, so comes with a turbocharged 2.0-litre 4-cylinder engine and 4-wheel drive as standard. There’s no V6 engine, like the one in the Touareg R, though.

That’s not to say the new Arteon R is down on power. It has 320hp and 420Nm. VW hasn’t said how fast the Arteon R will be, but you can bet it’ll still do 0-60 in less than five seconds. Which should make it slightly quicker than a diesel-powered Audi S5 Sportback.

The Arteon R also comes with some visual upgrades. It gets a black grille for starters, 20-inch alloy wheels and tinted brake lights. There’s also a sports exhaust, suspension that’s 20mm lower than the standard car and a Lapiz Blue paint option that’s exclusive to R and R-Line models.

The other big news is there is now an estate version of the Arteon. Obviously, in keeping with German brands’ trends, it’s not called an estate. Audi calls its estates ‘Avants’. BMW’s are ‘Tourings’. And Mercedes are Wagons. And now VW’s chosen the name ‘Shooting Brake’ for its brand-new Arteon estate. To be fair Arteon Shooting Brake does sound better than Arteon Estate – which sounds like a new housing development.

It gets a longer, flatter roof than the regular Arteon. And the kink in the rear window means it doesn’t just look like a dolled-up Passat Estate from the side, either.

All this means it looks lower and longer than the regular Arteon. But it’s actually exactly the same length as the regular car. And it’s 19mm taller.

The whole point of an estate car is to be more practical than a hatchback or a saloon, right? So, how much bigger is the Arteon Shooting Brake’s boot than the regular car? Just two litres bigger. That’s all. Makes you wonder why they bothered really… Well, apart from the fact it looks cool and passengers get a bit more headroom in the back.

That said, it’ll still carry 565 litres of luggage. Which is 85 litres more than you can fit in an Audi A5 Sportback. Although, you can fit 650 litres in a VW Passat Estate, so that’s still the car to go for if you fancy doing a bit of antiquing in your VW.

There are changes to the Volkswagen Arteon’s interior, too. The old car’s analogue clock has gone. And the physical heating controls have also disappeared. Now, you get a row of touch-sensitive keys under the infotainment system – just like in the new VW Golf, which isn’t so easy to use while you are driving.

VW has resisted the temptation to give the new Arteon the Golf’s tiny gear selector. But, they have changed the layout of the dashboard and air vents, so it doesn’t just look like a copy and pasted Passat cabin anymore…

You can also get the Arteon with some fancier interior trims. So you can choose to pay for carbon-fibre or Eucalyptus inserts for a more natural feel. There’s 30-colour mood lighting and six different styles of seat trim.

As well as the new R’s 2.0-litre turbo, you’ll be able to get the Arteon with a bunch of more tame, less expensive, more economical engines. Petrols include a 150hp 1.5-litre petrol engine, a 2.0-litre with 190hp or 280hp – the latter of which is all-wheel drive rather than front wheel drive.

There is also a Volkswagen Arteon Plug-in Hybrid in the range. This uses a 1.4-litre petrol engine and an electric motor to produce 218hp. Fully charge its 13kW battery and you can drive for around 33 miles in electric-only mode. This also means you won’t have to pay the London congestion charge.

The hybrid’s petrol engine and its electrical bits are shared with the VW Passat GTE. So, it doesn’t take a genius to figure out that the Arteon hybrid should return similar performance and economy figures which means 0-60mph in around 7.5 seconds and 180mpg – well so long as you plug it in regularly.

As an added bonus, the Arteon hybrid also lets you turn on and set the car’s air conditioning remotely using an app. Handy on very hot or very cold days, as you can use mains electricity to get your car to the right temperature so you don’t have to use extra fuel to run the air-con when you start your journey.

The infotainment system is now the same one as you get in the recently revised Passat but unfortunately not the all new system from the new Golf. There is a 9-inch touchscreen as standard which is same size as the upgraded optional display you could get in the old Arteon and you get the same old digital dials, too.

However, now you can connect your phone via Apple CarPlay and Android Auto without using a cable. And the VW ‘We Connect’ app lets you use your smartphone as a key to unlock the car. Well, if you have the latest Samsung phone, anyway.

The new Arteon also comes with VW’s latest voice command system. It’s supposed to understand plain speech, but let’s just say it had it flaws when we tested it. Find out more in new VW Golf review.

You’ll be able to get the new Arteon with an upgraded cruise control that’ll keep working all the way to 131mph. Not that you should ever use cruise control at more than 70 – mind. It’ll also accelerate, brake and steer for you in traffic, and it can recognise roadworks and slow down for them and help steer you around cones. You also get auto emergency braking, park assist, and automatic headlights as standard.

With a new Volkswagen Arteon on the way, now could be a great time to get a deal on the current model. Tap the button below to see the latest VW Arteon deals.