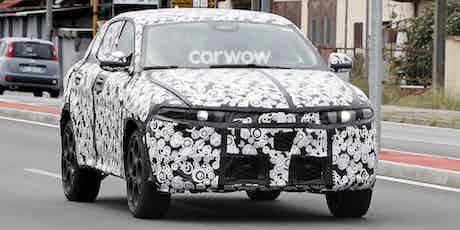 The upcoming Alfa Romeo Tonale SUV has been spotted testing and looks set to launch with plug-in hybrid power. Read on for full details…

Alfa Romeo is getting closer to launching its critical Tonale SUV, which will be the famed Italian brand’s first plug-in hybrid model, and the start of a journey that will see Alfa become a fully electric brand by 2027.

The Tonale would’ve been out by now based on the original plans, but Alfa’s newly-installed chief executive — Jean-Philippe Imparato, who did such a good job of turning Peugeot around — decided to delay the launch of the car by three months. He was apparently unhappy with the car’s hybrid performance and told the engineers to go back and improve it.

With Alfa’s European boss, Roberta Zerbi, having said at the 2019 launch of the Tonale concept that it would reach production with very few changes, though don’t expect any dramatic alterations to the Tonale’s styling.

It’s very much an Alfa, with heavily-lidded headlights, that deep V-shaped grille, and a chopped-off ‘Kamm-tail’ look at the rear.

What you can see, peering under the disguise of this prototype, is that the headlights have grown a little compared to the original concept, but retain the same three-section LED setup (have a look at the photo with the indicators lit up — there’s more than a hint of the old Brera coupe about that look.

There seems to have been a few tweaks to the side glass and the rear lights, but overall the shape and styling appear to remain the same, which means it should be one of the more handsome of the current premium crossover brigade.

The Tonale’s cabin remains a bit of a mystery for now. The concept had a heavily stylised interior, with a big central spine running the full length of the passenger compartment.

That, presumably, will be toned down for production, but the digital dials — with a sculpted screen so as to fit into the traditional Alfa Romeo ‘hood’ on the dashboard — should make it through to showrooms, as will the big ten-inch touchscreen in the centre.

Alfa has come in for some criticism for the interior fixtures and infotainment setup of the current Giulia and Stelvio models, so expect to see some big strides forward in those departments.

The Tonale will be going up against the likes of the BMW X1 and Audi Q3, so space inside should be broadly comparable with those cars.

Before Jean-Philippe Imparato triggered that three-month delay, the Tonale was — essentially — going to be a reskinned Jeep Compass. While that’s still basically the case, the delay will have given time to boost the Tonale’s performance.

It shares a 1.3-litre turbo petrol engine and electric motor setup with the Compass PHEV, which comes with a choice of 190hp or 240hp versions, with a range of 30-miles on electric power when you fully charge up the 11.4kWh battery. Front-wheel drive and four-wheel drive versions should be offered.

What isn’t know yet is exactly what changes Imparato ordered. More battery range? Quite possible, as given the march of technology it should be possible to squeeze an extra few kWh into the available battery space. More power? Maybe, but possibly the concentration has been on making the 1.3-litre engine feel and sound more like an Alfa Romeo powerplant should do.

Alfa has previously promised that the Tonale will have exceptionally sporty steering and that the plug-in hybrid system isn’t there merely to trim the CO2 figure, but also to make the car more engaging to drive. Can Alfa pull that off? Time will tell…

The delay for hybrid improvements has pushed the Tonale’s release back, and so now it’s expected to be on sale in the UK in the first few months of 2022. A base price of around £38-39,000 is likely if it’s to be competitive with its BMW and Audi rivals.

Expect to see a special ‘launch edition’ with unique colours and high spec at first, before more affordable versions start to roll out with the 190hp model as the entry-level, and the more powerful 240hp version possibly given the ‘Veloce’ badge to line it up with the Giulia saloon and Stelvio SUV. Alfas tend to be well-equipped as standard, so there will probably not be a very long options list.

Can’t wait for the Alfa Romeo Tonale? Check out the latest Alfa deals or compare the best SUVs on sale now.