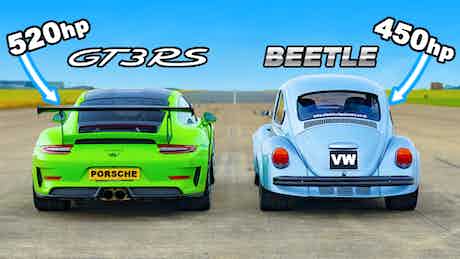 The Porsche 911 has tackled many challengers in our drag races, but now it’s time for it to face a tough rival – a 1972 Volkswagen Beetle.

It goes without saying that this isn’t a standard Beetle, it’s been converted to run on electricity by Electric Classic Cars. It has the electric motor from a Tesla Model S, which means this little love bug has 450hp and 675nm of torque. That’s a lot when you consider it only weighs 1050kg.

So can the Beetle take down Porsche’s finest?  You’ll have to watch the video to find out.