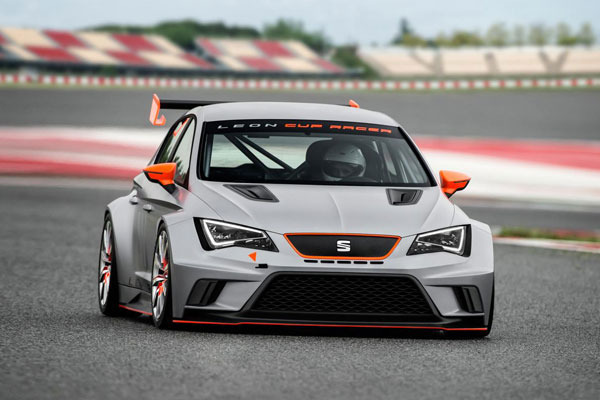 It won’t have escaped your notice that the all-new SEAT Leon is winning a few fans.

Some are going as far as suggesting it’s every bit as good as the MK7 Volkswagen Golf. Indeed, the new three-door SC – the first three-door Leon ever to roll off the Spanish production line – has certainly injected some much needed latin flair into the range.

And now SEAT has done this – the Leon Cup Racer. To coin a phrase from a well known snack – it’s a bit of an animal.

It’s a 330hp, 340Nm of torque firecracker of a Leon which SEAT claims has been built to focus “entirely on the pursuit of quick lap times”. There’s no green wash or CO2 emissions nonsense here.

What’s equally as exciting is the fact that the SEAT Leon Cup Racer is no mere fanciful flight of folly. You can actually buy this thing. Don’t believe us, well head along to the Goodwood Festival of Speed next month for a demonstration. Then – no doubt suitably impressed – write a cheque for somewhere in the region of 60,000.

And if that’s not enough, throw another 20,000 at SEAT and they’ll build you an endurance Cup Racer, complete with sequential racing transmission and a mechanical diff lock. You can even see Leon building one from scratch in the video above.

Alternatively, check out the Leon’s buzzScore, where it achieves a healthy 8.3. You may find the standard car a little more to your liking. And a little more socially acceptable in the office car park.

It’s hard not to be impressed with what’s going on at SEAT right now and the Leon is central to the brand’s ambitious growth plans. It started with the new Leon, which manages to trump the old Leon in just about every department possible. Then the three-door SC arrived, which is so much more than a Leon with two less doors. No really, it is.

The Leon bandwagon is showing no signs of slowing down either, because this year, the pair will be joined by the new Leon ST – a sporting estate version of the hatchback.

And with the Cupra arriving next year, could this be the time to get excited about SEAT once again? If the Leon Cup Racer is anything to go by, we certainly think so.

Check out our full buying guide to the SEAT Leon with reviews, user reviews, photos, videos and stats.

Looking for a great deal on your new SEAT Leon without any hassle?

With carwow you can compare upfront offers from main UK SEAT dealers and get huge savings. Compare offers for the SEAT Leon you’re after by discount, delivery time, location and reviews of the dealers from previous carwow buyers. Communicate with dealers online, without them hassling you or putting any pressure on you to buy. If you’re interested in their offer, buy directly, there are no online payments. There’s no need to haggle and no hidden costs.

it’s the best way to buy your new car! Find out more.