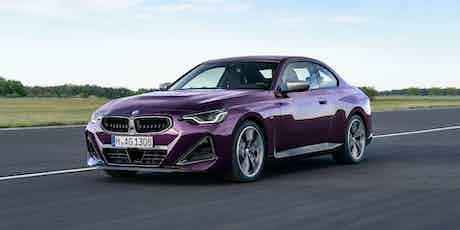 This is the new BMW 2 Series Coupe — a proper rear-wheel-drive, two-door BMW. Read on for full details, including a hot M240i version.

This is the new BMW 2 Series Coupe. No, it’s not an updated version of the 4-door Gran Coupe – It’s a proper rear-wheel-drive 2-door coupe that’s based on the latest 3 Series and 4 Series.

It’s on sale now, priced from £34,980. You can choose from one diesel or two petrol engines, including a 3.0-litre six-cylinder unit borrowed from the excellent BMW M340i.

There are three versions of the new BMW 2 Series Coupe: the 220i, the 220d and the M240i xDrive. All 2 Series Coupe’s come in M Sport trim, which means you get an aggressive bodykit and some sporty details for the interior.

Check out the latest BMW deals

You may be pleased to hear that the new 2 Series coupe has managed to evade the huge grills of the 3 and 4 series. Instead, it gets flatter kidney grilles, like the ones on a 2 Series Gran Coupe.

The new Coupe’s headlights are completely unique, though, and the two cars look totally different from the side. For a start, the new 2 Series Coupe has two doors instead of four like the Gran Coupe, and it has a much longer bonnet and a curvier roofline.

There are some extra creases on the doors and some new brake lights at the back, and BMW has kept the real exhaust pipes – phew.

There are a few invisible aerodynamic features at play on the new 2 Series Coupe, including an undertray to smooth the airflow under the car and shutters in the grille that can close to reduce drag when the engine doesn’t need cooling. There are also hidden vanes and splitters that reduce front-axle lift to make the car more stable at high speed.

The new 2 Series isn’t based on the 1 Series, it’s actually based on the 3 Series saloon. Yes, this means it comes with rear-wheel drive as standard.

It also gets the same 8-speed automatic gearbox as those cars, and you can’t get it with a manual. Well, not yet, anyway…You do get launch control as standard, though.

Inside, the new BMW 2 Series Coupe looks almost exactly the same as the latest 4 Series. The dashboard is pretty much identical, and so is the centre console.

You get the same iDrive 7 system as the new 4 Series too, with a 10-inch touchscreen on the dash, and a 12-inch display behind the steering wheel. And it comes with over-the-air updates so you won’t have to take it to a dealership to get all the latest features installed.

The new 2 Series is almost 10cm longer and more than 6cm wider than the old car, so it should be roomier inside. It also has a 390-litre boot, which is 20 litres more than you got in the old 2 Series Coupe. The 430-litre boot in a 2 Series Gran Coupe is still bigger, though.

There’s also a 220d model with a 190hp 2-litre diesel engine. This is quicker and more economical – partly because it has a new 48V mild-hybrid system. It’ll do 0-60mph in 6.9 seconds and manages 60mpg. Not bad for a sporty-looking coupe…

Unlike the old M240i (which was rear-wheel drive as standard and had four-wheel drive as an optional extra) every new M240i comes with 4-wheel drive. It’ll do 0-60mph in 4.3 seconds, which is a tenth of a second quicker than the old 4-wheel-drive car.

The M240i comes with BMW’s optional M Sport brakes as standard, and it also gets a limited-slip rear differential and M Sport exhaust, too.

Best of all, BMW is working on a new M2 model with even more power. And, you can bet there’ll be a CS version along at some point, too.

The new 2 Series Coupe is 3cm lower than the old model, and its wheels are set wider apart than before. Its chassis is also 12% stiffer, and the bonnet and front wings are made from aluminium to save weight. All this should help reduce body roll and make the new car feel more planted in fast corners.

But it’s not all just about sporty handling… Every 2 Series Coupe has sound-proofing built into the windscreen to help reduce wind noise. And there’s an optional Driving Assistant pack that comes with adaptive cruise control and a bunch of other safety systems, so it should be pretty relaxing to drive for long periods.

Looking for a great deal on a new BMW? Compare the latest BMW deals available through carwow of check out the top 10 coupe cars on sale right now.