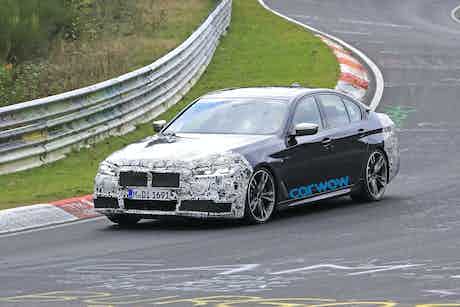 carwow’s mole in Germany has spotted updated versions of BMW’s 5 Series circling the Nurburgring, here’s all you need to know.

The current BMW 5 Series is one of the best all-round cars you can currently buy, but with the new Audi A6 going on sale last year and a new Mercedes E-Class on the way, it’s clear the best must be improved upon.

That said, the new 5 Series will be a facelift rather than an all-new car. That is evident from these test cars – a saloon and a Touring – whose bookend camouflage hint that nothing much will change in-between. What you can expect to see is a new bolder, bigger and – if current BMW design trends are anything to go by – more vulgar front grille, with a revised bonnet and lower bumper designed to accommodate it.

Either side of the famous kidney-style front end you’ll likely be able to specify laser LED headlights for the first time. They’re ten times brighter than conventional LEDs and just as compact, up until now the technology has only been offered on top-of-the-range models such as the 8 Series coupe and i8 petrol-electric supercar.

You can expect the rear end to get much the same treatment as the front. Slimmer LED tail lights and a refreshed design will keep things looking sharp and you can expect the bumper to also be tweaked.

The biggest updates, though, are destined for the inside. There you can expect to get larger and crisper infotainment screens designed to get the best out of BMW’s latest 7.0 operating system. It understands spoken voice commands, lets you open and lock the car using a virtual key sent to your smartphone (it only works on Android, currently) and can learn your routines, so if you always drive to the tennis club on a Saturday morning the car will preprogramme the sat-nav in anticipation.

Even the autonomous driving aids will be boosted with the new 5 Series likely to get BMW’s reversing assistant which was first seen in the 3 Series. It can memories your steering inputs for up to 50 meters as you drive along so that, if the road ahead is blocked, the car can pull off tricky reversing manoeuvres for you. It can even negotiate tight turns like backing around pillars in a multi-storey car park.