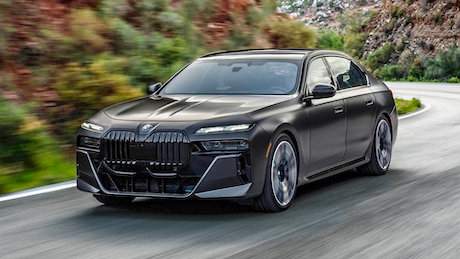 This is the new BMW 7 Series. it’s the most luxurious and high-tech car BMW has ever made and is now available as a fully electric car called the BMW i7. Read on for full details…

This is the new BMW 7 Series. No, it’s not a concept car or a design study – This is what BMW’s brand-new alternative to the Mercedes S-Class and Audi A8 actually looks like.

The design isn’t the only shocking thing about the new 7 Series – you’ll also be able to get a pure electric version called the i7 that could tempt you away from a Mercedes EQS.

New BMW 7 Series and i7 design

These feature thin daytime running lights above a set of partially hidden main beams that mimic the design of the recently updated BMW X7 SUV.

The rest of the new BMW 7 Series looks pretty conventional. It has a similarly classic three-box saloon-car shape as the old car, albeit with fewer creases down the sides and more angular window frames on each side.

The door handles are now flush with the car’s body, and you can choose from a range of 19- to 21-inch alloy wheels with new aerodynamic designs.

The new 7 Series’ rear-end looks simpler than ever, and gives this seventh-generation model a slightly old-school saloon-car character.

The fully electric BMW i7 (above and below) looks almost identical to the standard 7 Series, with the exception of some blanked-out air intakes and a few flashes of bright blue trim.

Sure, it isn’t as futuristic-looking as the uber-aerodynamic Mercedes EQS electric car, but neither does it remind you of a stylised computer mouse with wheels…

New BMW 7 Series and i7 interior

The big news is that the new 7 Series and i7 get BMW’s latest curved widescreen infotainment system – similar to the one in the i4 and iX.

Check out these BMW i4 offers

The rest of the BMW 7 Series’ cabin is completely bespoke, however. It comes with a minimalist dashboard with hidden air vents, a new steering wheel and plenty of touch-sensitive buttons under crystal-effect panels on the dashboard and doors.

These look great, and they let you adjust the climate controls and heated seats without using any fiddly on-screen menus.

The new 7 Series and i7 aren’t just filled with tech, they’re packing some very posh materials, too. You can get oak and ash wood trims, stainless steel speaker grilles, crystal glass controls, carbon fibre bits, and even cashmere seat fabric.

And on top of all that (quite literally) you get a massive panoramic glass roof with built-in mood-lit panels.

The new 7 Series and i7 will only come as long-wheelbase models. This means you’ll get absolutely loads of legroom in the back, whether you like it or not.

The new cars are actually 1cm longer, almost 5cm wider and more than 5cm taller than the old long-wheelbase 7 Series.

It’s one thing to have a massive touchscreen in the front. But what if you like to be chauffeured around in the back?

Well, BMW has given the 7 Series and i7 an optional 31-inch 8K display that folds down from the roof and stretches all the way across the back seats.

It has a built-in 5G internet connection with Amazon Fire TV, so you can stream movies and make video calls on the move, and you control it using touchscreen menus or with a dedicated 6-inch touchscreen that’s built into the rear doors.

Your movies should sound as good as they look because the 7 Series comes with a Bowers & Wilkins stereo system with up to 36 speakers.

The BMW 7 Series will come with 6 different petrol and diesel engines, all fitted with an 8-speed automatic gearbox and some form of hybrid system.

Rear-wheel-drive 735i models use a turbocharged 3-litre 6-cylinder engine and a mild-hybrid system to produce 286hp. There’s also a more powerful rear-wheel-drive 740i version with 380hp.

If you need even more oomph, there’s a 4-wheel-drive 760i that uses a mild-hybrid system and a twin-turbo 4.4-litre to make 544hp. However, none of these cars will go on sale in the UK.

Instead, our BMW 7 Series range kicks off with the 4-wheel-drive 740d with a twin-turbo 3-litre straight-6 diesel engine featuring a mild-hybrid system. It makes 300hp and does 0-60mph in 6.3 seconds

If that doesn’t sound fast enough, there’s also the 4-wheel-drive 750e hybrid. This uses a 310hp 3-litre straight-six petrol engine and a 200hp electric motor to deliver 490hp and cover the 0-60mph sprint in 4.9 seconds.

The 750e and M760e plug-in hybrids can drive for around 50 miles on electric power alone, according to the latest WLPT tests.

New BMW i7 batteries and range

The BMW i7 is compatible with 195kW fast charging, which is slightly slower than the 200kW in the Mercedes EQS, but it’s enough to give you an extra 106 miles of range in about 10 minutes.

New BMW i7 motors and performance

The i7 60 comes with dual motors that produce 544hp combined. That’s about 20hp more than you get in a Mercedes EQS 580.

This means it’ll do 0-60mph in 4.7 seconds. That’s a few tenths of a second slower than the Mercedes, which will do it in 4.3 seconds.

BMW has confirmed it’ll build a much quicker i7 M70. It’ll have 660hp and 1,000Nm of torque, making it the most powerful BMW road car EVER. Expect it to do 0-60mph in comfortably less than 4 seconds.

New BMW 7 Series and i7 driving

Every new BMW 7 Series and i7 gets adaptive self-levelling air suspension as standard. This can lower the car by 10mm at speed to help reduce drag and raise it by 20mm so you don’t scrape the bumper on steep driveways.

You can also pay extra to get the new car with rear-wheel steering, just like on the new Mercedes S-Class and EQS. This turns the rear wheels by up to 3.5 degrees to make the car more manoeuvrable in town and more stable on motorways.

There’s also an optional active body-control system that uses the standard air suspension and some extra electric motors fitted to the anti-roll bars to stop the car’s body from leaning in tight corners.

The BMW 7 Series and i7 come with loads of driver assistance features, including a new adaptive cruise control system that works at up to 130mph. This can accelerate, steer, brake and change lanes for you, and uses GPS data to slow down for corners, junctions and sliproads.

New BMW 7 Series and i7 price and release date

Petrol, diesel and plug-in hybrid versions of the 7 Series will go on sale in Spring 2023. BMW hasn’t confirmed how much they’ll cost, but you can expect them to set you back approximately the same as a comparable Mercedes S-Class, from around £80-85,000.

Looking for the easy way to change your car? Sell your current car and check out the latest new car deals available through carwow, all from the comfort of your own home. Tap the button below to get started.